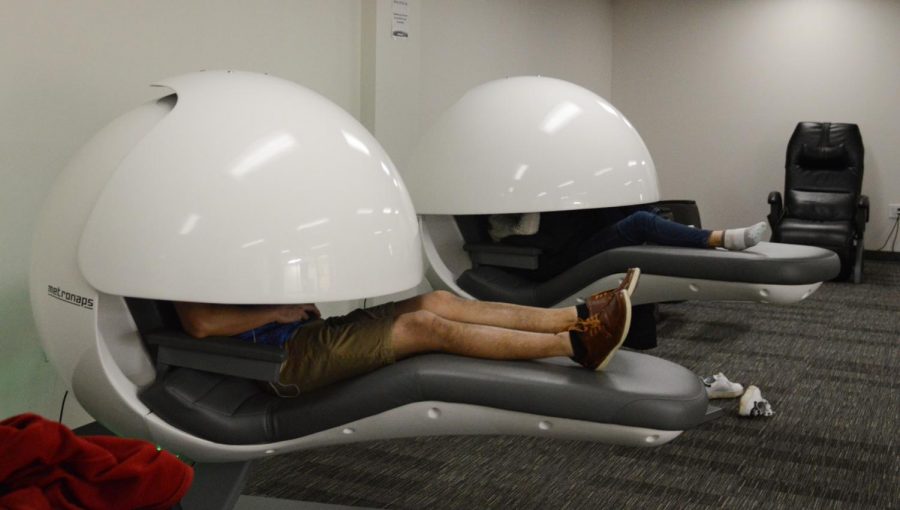 Freshman Gerome Dosomo, left, reclines in a napping pod in the Chinook Student Center. Six Zero Chairs and three EnergyPods are in the building’s study areas and Nap Zone. The Chinook, which was originally the old Bookie, opened in March 2017.

WSU has spent about $40,000 on recliners and napping pods for studying and sleeping areas in the Chinook Student Center, according to invoices obtained by the Evergreen.

Last spring, undergraduate WSU students started paying a mandatory $98 fee for use of the Chinook, part of which paid for amenities such as napping pods.

The CUB purchased the pods from the company MetroNaps for about $9,000 each, according to WSU Division of Purchasing invoices. The total price for three EnergyPod units and three Zero Chair recliners purchased from Metronaps, was about $40,000.

The CUB purchased the first EnergyPod in November 2015. The pod, which features a “diamond white exterior,” “moon grey upholstery,” and a Bose sound system. It came with a one-year warranty, telephone technical support and a six month service visit. After a $712 shipping and delivery fee and a $825 assembly and installation fee, the total for the first unit was $9,537.

This unit was used as a sample amenity in the CUB study, Senior Associate Director Karee Shaw said. The unit was damaged shortly after purchase, so it was sent back to Metronaps.

“The first nap pod we ordered, we did find that the arms were not as tight as they needed to be for the amount of use they were getting,” Shaw said.

She said Metronaps fixed the problem and changed the materials used in the pod to make it more durable. This first unit is in the nap room along with the two other napping pods.

In October 2016, WSU Facilities Services purchased two more EnergyPods and three Zero Chair recliners from Metronaps, according to the invoice. The price for the recliners was about $3,300 each for a total of about $10,000. The price of the two energy pods was $17,990.

WSU built the Chinook building after students approved a referendum in 2015 asking if they would be in favor of paying to renovate the old Bookie building into a new student center. Shaw said the referendum stated the building would include “nap areas.”

Shaw said she worked on multiple surveys and focus groups in the years leading up to completion of the Chinook to determine whether WSU would buy napping pods and which ones. University Recreation and the CUB led the studies, she said, which drew about 3,000 participants.

“Napping-type amenities were something that was wanted by the student population,” she said.

There are three nap pods and six recliners, Shaw said, and they are located on the same floor as the small group study rooms. She said having the study rooms and the nap room near each other works well together because students can alternate napping and studying.

“We see very steady use in that area,” she said.

Shaw said all of the money for the testing and units came from the Chinook project budget. She said they currently are not planning to buy more napping units except to replace worn ones in the future, similar to the way they would replace any other worn furniture.

“We don’t have any plans to add to this space,” Shaw said.