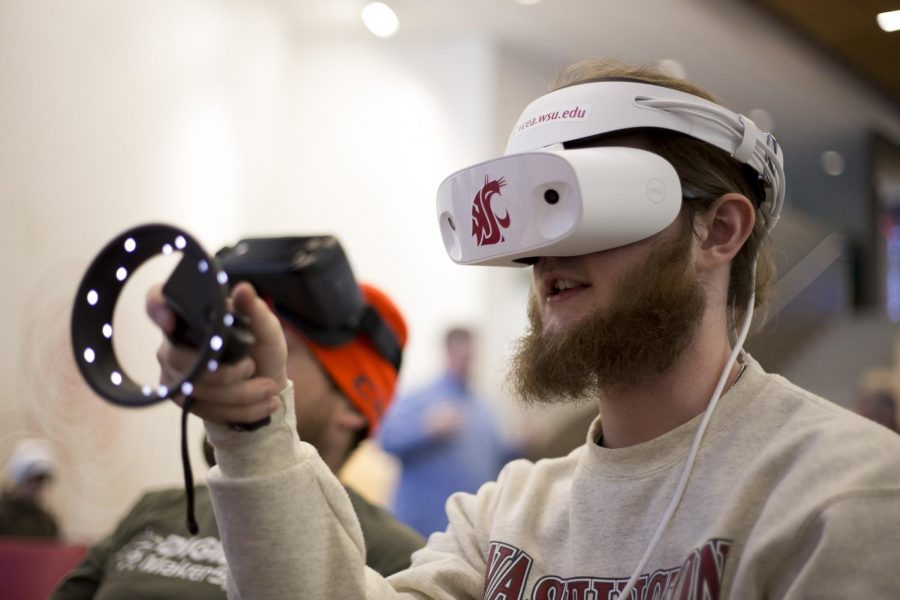 Garth Bates, a junior computer science major, learns VR controls while using a VR headset and a hand controller at the Olympic Games Highlight VR event Wednesday in the Voiland College of Engineering and Architecture.

WSU is making an appearance at the Pyeongchang Winter Olympics — not in skiing, skating or curling, but in virtual reality.

Sankar and Uma Jayaram, professors in the School of Mechanical and Materials Engineering, started a virtual reality project at WSU in 1993. Over the years, they developed their project into a company, 3D-4U, with financial support from federal agencies and private companies.

The company was purchased by Intel in 2016 and is now providing virtual experiences for this year’s Olympics in South Korea.

Over the past week, viewing parties on campus have allowed students, staff and faculty to experience the Olympics through virtual reality.

“It’s great for spectators and entertainment,” said John Gonzalez, the employee of the Voiland College of Engineering and Architecture who set up one of the events Wednesday.

It all began when Sankar Jayaram was unable to attend a Seattle Seahawks football game. This inspired him to use his expertise to create a way for him to feel as if he were a field-side spectator.

Their company, 3D-4U, hired WSU graduates to develop virtual reality devices. Once the project was underway, they tested their cameras in Martin Stadium, taking 180- to 360-degree views of the field.

He said they set hemisphere pods at a fixed location at the event and broadcast a live feed. These pods have 12 cameras that mimic the curvature of the human eye to make it as realistic as possible, taking a panoramic video that can be stitched together.

More affordable versions of virtual reality headsets are already available to the public, but new developments and simulations that can give the public access to historic events such as the Olympics make Gonzalez optimistic for the future of virtual reality technology.

“I’m excited to see what it’ll do in five years,” he said.

The next virtual reality viewing party takes place from 10 a.m. to 12:30 p.m. Friday in the SPARK Atrium.

The Jayarams will return to WSU from South Korea on April 5 to share their experience at the Voiland College of Engineering and Architecture’s Lanning Lecture.