Cougars head to California for a rematch with Golden Bears 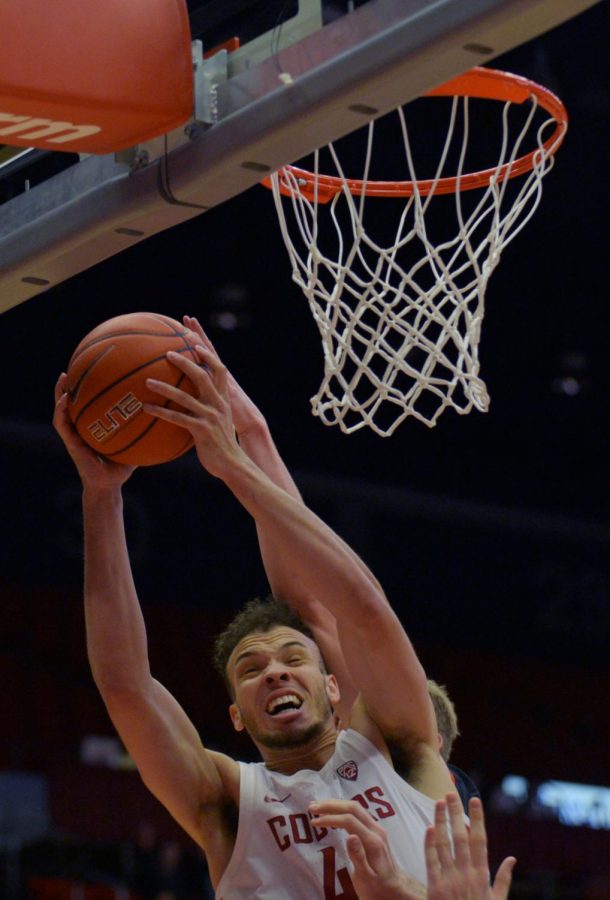 Redshirt senior forward Drick Bernstine attempts to score in a game against Utah on Saturday at Beasley Coliseum.

WSU men’s basketball will seek its first Pac-12 road win of the season today against University of California, Berkeley.

Franks said he was able to take advantage of the Golden Bears defense last time and is anticipating they will make some adjustments to slow the Cougars down.

“They were in a zone and the corners were open,” Franks said. “I found some good holes in the zone, which they will probably game plan to fix.”

Franks said he will not go into the matchup expecting those shots to be open, but simply looking to play his game and take what the Golden Bears defense gives him.

Sophomore guard Malachi Flynn said if Cal does play a zone defense, he is confident they can get open looks again, just like last time. He said WSU can’t go into a game thinking the defense will act one way or another, they just have to prepare for anything and attack accordingly.

Last time out against the Cougars, Sueing had eight rebounds, Franks said it will be important for him to keep Sueing away from the paint.

“Sueing is a good, talented freshman that you have to go in and keep him off the glass,” Franks said. “As long as I play hard, I’ll be alright.”

Flynn said the Cougars need to limit Sueing and Coleman’s touches and not give them any open looks. He added that they need to guard both players closely and try to make everything they do difficult.

In their last two games the Cougars played University of Colorado and University of Utah, with both contests coming down to the wire. Against the Buffaloes, the Cougars had only seven turnovers and ended a seven-game losing streak. WSU was unable to keep the momentum going when they took on the Utes as a late comeback fell short.

Flynn said the Cougars’ performance in both these games is something the team can build on for the rest of the season. He said he felt the team not only got better, but also closer.

The Cougars are confident they will return to Pullman with two victories away from home, Flynn said.

“We can go down to California with a different energy and togetherness knowing that we can win those two road games,” he said.

Franks said the team will have to be locked in defensively if they want to finally pick up a conference win outside of Beasley Coliseum.

“We need to try to be road warriors,” Franks said. “We have yet to get a win in an away game and we seek to do that this trip.”

Tipoff is set for 8 p.m. at Haas Pavilion. The game can also be viewed live on Pac-12 Networks.