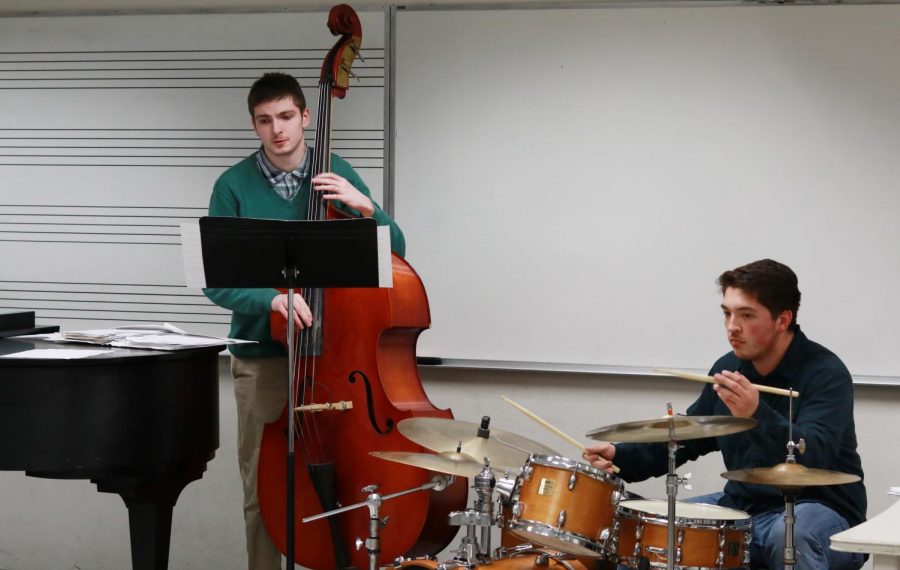 In a small room in Kimbrough Music Building, brass, woodwind, string and percussion instruments warm up as The Jazz Wires begin to rehearse. The Ray Noble standard “Cherokee” blares as fingers fly through the air playing pure jazz. They’re preparing for the Lionel Hampton Jazz Festival and other gigs right around the corner.

The Jazz Wires are led by Raul Blanco, a first-year graduate student from Cuba. The band features Noah Austin on trumpet, Brandt Fisher on tenor sax, Gabriella Aragon on trombone, Anthony Channita on drums, Joe Ballestrasse on bass and Blanco on piano.

The members are diverse in both academic year and major. The band has a freshman, two sophomores, a junior, a senior and a grad student.

The group’s musical diversity stems from the character and individuality of the band members. Austin and Aragon both have a background in Ska music, while Raul has trained as a Latin musician because of his upbringing in Cuba. Channita and Ballestrasse come from classical origins, and Fisher has always been a jazzman.

“We started playing standards, but then I started composing for the Latin combo and then we played here,” Blanco said. “It’s kind of a jazz-Cuban-funk fusion. Because of the Latin context, it sounds Cuban but it’s really funk.”

Blanco has been composing music since last semester. But he has been arranging music in Houston, Texas, for the past nine years.

Blanco’s knowledge of composition has been helpful for the band. You have to be able to play and write your own music to be a successful recording artist. Jazz standards or charts are the lifeblood of the genre. However, they cost money to record because of royalties paid to the original composer or performer. This is why Blanco is pushing himself and his members to write new music all the time.

“ ‘Flight of the Bumble Blues’ was an idea I stole from Brandt, so I labeled him as co-composer,” Blanco said of one of their more recent compositions.

Austin, a senior mathematical physics and jazz performance major, adds a bit of science to the group’s compositions.

“Noah is the floating electron of the band,” Blanco said. “He’s the one that creates the magnetism. He likes to experiment with different meters, keys and quarter tones.”

A quarter tone is a note in between half steps, which is irregular in Western music.

Naturally, everyone wants to do their own thing and has other obligations, but they’re all still drawn to the band. Their varying ages beg the question: Will The Jazz Wires play on as people graduate?

Aragon said they will stick together if they’re famous.

“We’re trying to record as much as we can so we can have the memory, and if we can keep working together, that’d be awesome,” Blanco said. “The original idea was to record and play, but then it grew up into a nice little family.”

Their next gig is at the Lionel Hampton Jazz Festival, where they’ll be performing as “Jazz Combo II” at 3:40 p.m. today. They’ll also be performing March 8 at Rico’s.

The album itself has a mix of classic jazz charts and original compositions from the band. Their eclectic style is mirrored in their album cover: a saxophone filled with spaghetti.