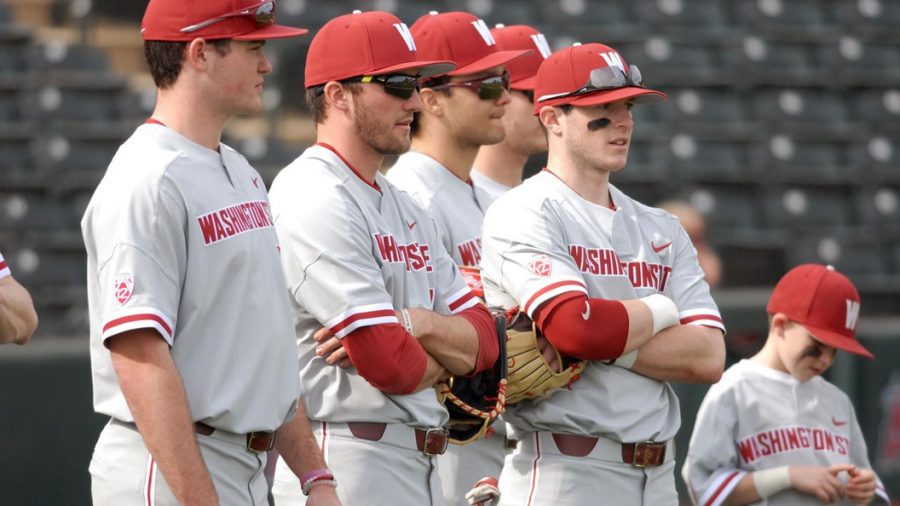 From left, Brody Barnum, Ryan Ramsower and JJ Hancock stand after the game against Grand Canyon University on Tuesday where they won 5-4.

WSU baseball lost the first game of a double header with University of Alabama 12-4 Friday in Tuscaloosa.

The Cougars (2-4) recorded 12 hits and four walks but could not capitalize, stranding 12 runners on base in the game.

Senior first baseman James Rudkin hit his first career home run in the top of the third inning to give the Cougars an early two-run lead. Junior Andres Alvarez, who scored on the Rudkin two-run blast, racked up three hits. Sophomore Danny Sinatro, freshman Jack Smith and Senior JJ Hancock each two hits of their own.

Redshirt sophomore pitcher Isaac Mullins made his second start of the year for WSU. The left-hander threw four innings and allowed four runs on six hits and three walks.

With the Cougars up 2-0 after the Rudkin home run, Alabama (5-0) answered with three runs in the fourth inning on five straight singles.

The Crimson Tide would continue to add to their lead with six runs in the fifth inning. Alabama sent 11 batters to the plate in the inning and recorded four walks, four singles and a home run.

The Cougars responded with two runs in the sixth inning. After loading the bases on three singles, Alvarez and sophomore Dillon Plew each drew a walk to make it a 9-4 game.

Alabama would add three more in the bottom of the seventh to give them a 12-4 lead, which they would hold on to take the first game in the series.