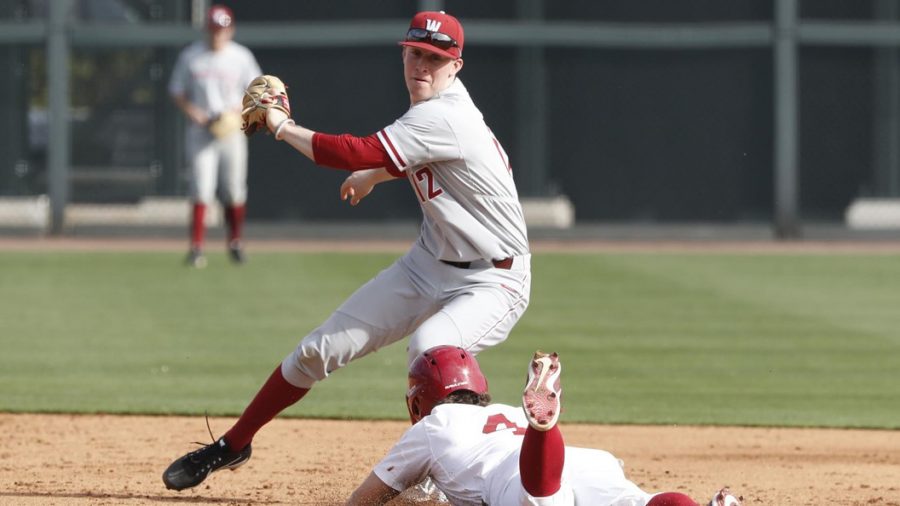 Freshman Jack Smith attempts to complete a double play in a game earlier this week.

WSU baseball lost to University of Alabama 9-3 in the final game of a weekend series in Tuscaloosa.

Senior Scotty Sunitsch started on the mound for the Cougars (2-6) after a strong outing against Nebraska in his last outing.

The Crimson Tide (7-0) jumped on Sunitsch in the first inning, loading the bases and driving in the game’s first two runs on a double.

Alabama scored on a double and a single in the second inning to make it a 3-0 game. Another double and single made it a 4-0 game in the third inning.

The Cougars got on the board in the fourth inning, pushing across a run on a groundout by sophomore catcher Cal Waterman.

WSU loaded the bases with no outs in the fifth inning and pushed across two more runs on a hit-by-pitch and a sacrifice fly. They did not get another hit and left the bases loaded to end the inning.

The Cougars gave up a run in the bottom of the fifth and trailed 5-3 heading into the seventh. Senior pitcher Ryan Walker recorded the first two outs in the inning before giving up a solo home run, two singles and an error to give Alabama three more runs, extending their lead to 8-3.

The Crimson Tide added one more run in the eighth inning to make it and held on to complete the sweep by a score of 9-3.

WSU will return home to begin the home portion of their season 4 p.m. Thursday against California State University, Sacramento.