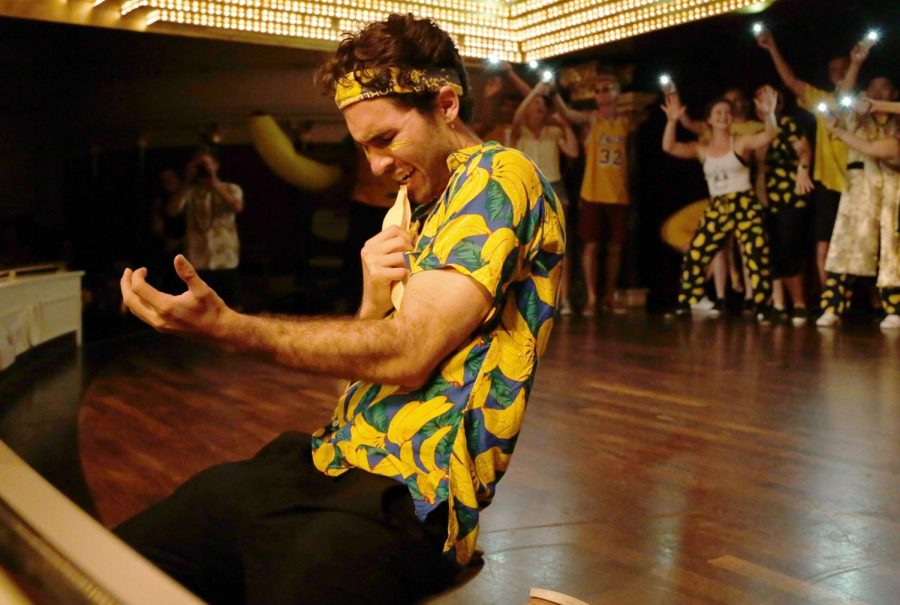 Austin Chandler of the Yellow Sea serenades the crowd during the lip-sync battle in the MV World Odyssey’s Sea Olympics on Feb. 16. Students were divided into sea teams based on their room numbers.

Each student aboard the MV World Odyssey, another name for the MS Deutschland, is assigned to a sea based on their cabin numbers. Each voyage the ship hosts the Sea Olympics, a full day of competitive events that range from tug of war to a rap battle. The seas that make up our ship’s population are the Adriatic, Arabian, Baltic, Bering, Red, Yellow and White seas.

Our morning started off with opening ceremonies and the introduction of each sea. All 600 students and faculty crammed into the giant theater room — Kaisersaal — at the bow of the ship.

Every sea bore its own color, which the students were encouraged to wear as representation. Looking out over the mix of purple, orange, blue, black, red, yellow and white outfits, you could feel the buzz of excitement in the room.

Spontaneously, someone from one of the seas belted out their sea’s chant. The Yellow Sea members, whose mascot was a banana, chanted, “This ship is bananas! B-A-N-A-N-A-S!” over and over, raising their voices with each time. Then another sea began its own chant, attempting to top the energy of the previous team.

The whole day was packed with a tight schedule of events. Students could only participate in up to three events, but each varied widely from goofy solo performances to rigorous team sports.

One of the first events was the whipped cream challenge. Using only their mouths, participants had to dig through a pile of whipped cream on a plate and search for five cherries. The official shouted “Go!” and all seven participants dove into their respective piles of whipped cream, furiously digging around and spitting out located cherries into a small bowl beside them.

The event lasted less than a minute, but it was so tense you would have thought we just witnessed a boxing match. The Bering Sea contestant won that event.

Another popular contest was the two versus two Ping-Pong match. Teams played a bracketed tournament with a one-loss elimination. Four of the best Ping-Pong players from each sea were chosen and then broken into two teams of two.

The crisp warm sea air made everything sticky to the touch, and it didn’t take long before we were all sweating. But none of the contestants seemed to care. As sweat built up, the competition only got more intense. Table tennis balls flew back and forth, popping with each swing of the paddle or bounce on the table. After an hour, the Baltic Sea placed first in the tournament.

For obvious reasons, the rap battle drew a lot of attention, especially when word of a young boy no older than 10 from the White Sea would participate. This rumor proved to be true: The young boy’s name was Max, and he was by far the fan favorite. He wound up winning the rap battle by a landslide.

Each rapper got to show off a two-minute rap they had prepared, and then two rappers would be pitted against each other. They would only have three attempts to come up with a better, cleverer rap than their competitor.

The last event of the games was a lip sync battle, which included as many contestants as each sea could scrape up. The seas choreographed a full dance to their song of choice and lip synced to the lyrics. Each team was met with cheers during their performances. Flips, splits and breakdance moves were a constant source of applause.

As the speaker went through the formalities of thanking the ship crew and faculty that participated and helped set up all the events, each sea was anxious to hear the overall results of the Olympics. A hush fell over the crowd when it was time to announce the rankings. Third place went to the White Sea, second to the Bering Sea and first to the Baltic Sea.