Senator seeks change from inside

Schilperoort has focused her efforts on the student government itself 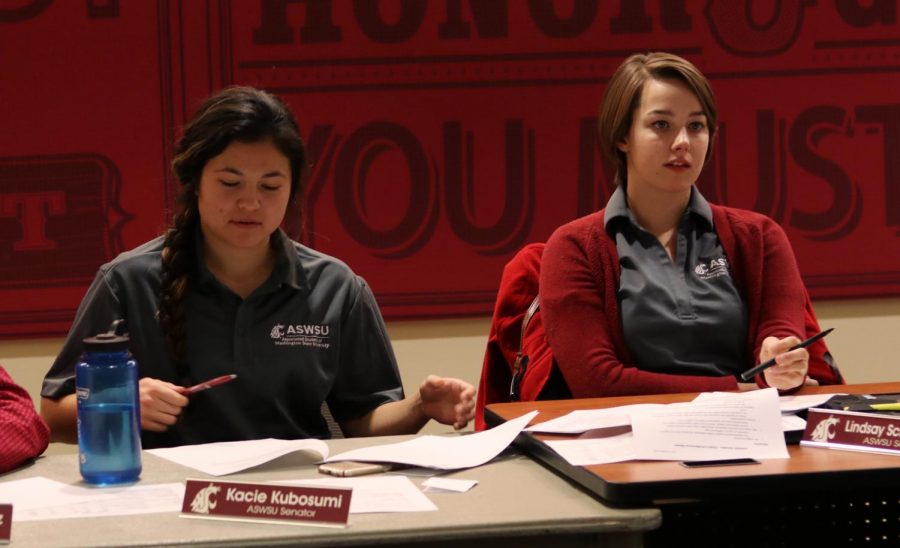 Kacie Kubosumi, left, and Lindsay Schilperoort at an ASWSU senate meeting Nov. 29 at the CUB.

The ASWSU Senate did not appoint Lindsay Schilperoort the first time she applied to fill a vacancy representing students in the College of Agricultural, Human and Natural Resource Sciences. She applied a second time after encouragement from another student leader and took her seat on the Senate in September 2016.

“I have always loved big projects,” Schilperoort said, “and I thought the Senate would be a really great way to get involved on a bigger level.”

Schilperoort, a junior agricultural and food business economic major, said one of the bills she is most proud to have worked on was one that created a new ASWSU committee called Issues and Forums.

She said the committee would host events with the intention of cultivating conversations oriented toward students’ perspectives.

“Especially with the last election cycle, the campus climate was pretty tense,” Schilperoort said. “We felt this committee and its specified purpose would be a great way to help bridge that divide and get people talking with each other and not necessarily at each other.”

Issues and Forums could do things like host movie screenings with discussions or moderate debates between student groups, she said.

The student government approved the bill last spring, Schilperoort said, and the new committee should hold its first event around the end of March. She said the first event would focus on how the net neutrality repeal could affect students. The event would be a student-driven discussion panel that would also bring in the expertise from professors in computer science, political science and other related areas.

Schilperoort said she plans to propose legislation in the coming weeks that would change sections in the bylaws regarding the passage of legislation to be more in line with ASWSU practice. She called it “the bill bill.”

The bylaws currently state legislation is categorized and sent to committees based on subject matter, Schilperoort said, but that slows down the whole process. Since most senators write legislation relevant to their own committees, she said, it is inefficient to require each proposal to go through specified committees.

Her proposed solution would be to unify the requirements for all legislation. Schilperoort said her bill — which she worked on with Honors Delegate Hayden Arend — would have legislation first show up in internal committee, then rules committee, then the Senate floor, as is common practice.

She said “the bill bill” would make the legislative system more efficient.

“It just streamlines the process,” she said.

While she did not see one specific issue overwhelming all others, Schilperoort said fees and diversity-related issues are leading concerns for students this semester.

In particular, she said, ASWSU got a lot of feedback about the proposed fee that would have required all students to buy a sports pass. The Senate voted the proposal down, stopping it before going to the student body for a vote, but the nature of the fee and whether students should have been able to vote on it remains a topic of debate.

“I think the students should have been able to vote on it,” Schilperoort said, “but personally I would not vote for it on election day.”

She said the fee would have been good for her because the prices of her sports passes would drop, but it would also force the purchase on the 5,000 students who choose not to buy one.

On diversity issues, Schilperoort said, ASWSU is not perfect, but it is improving.

“I think ASWSU needs to listen first and foremost,” she said, adding that the student government should not speak on behalf of student groups but instead let them voice their own interests.