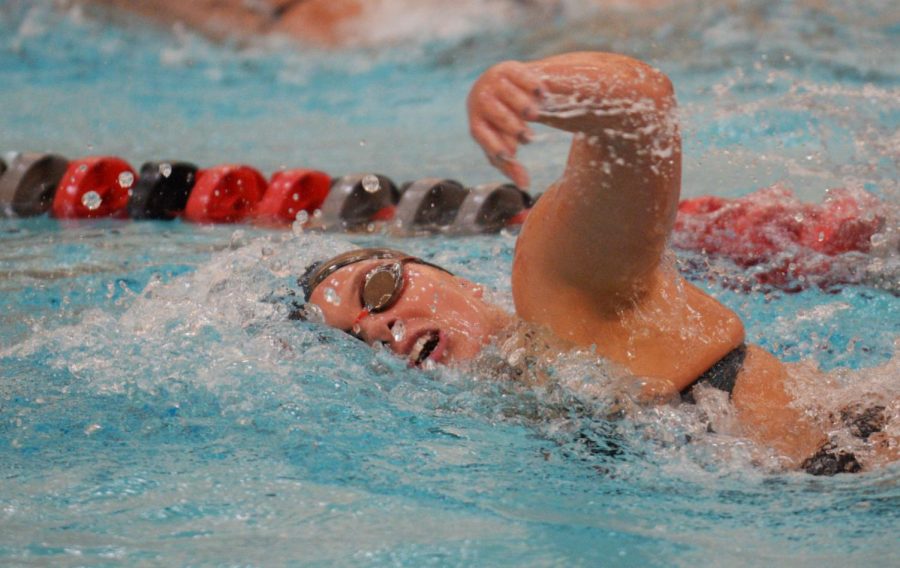 WSU freshman Sam Howell participates in the 500-yard freestyle in a meet against Oregon State on Jan. 26 in Gibb Pool.

WSU swimming finished eighth out of the nine teams that competed in the Pac-12 Swimming and Diving Championships held Wednesday through Saturday at the Weyerhaeuser King County Aquatic Center in Federal Way.

The Cougars ended with 307 points with the top-five teams all finishing above 900 points. Winning team Stanford University had 1,776.5 points.

The relay team placed seventh in the event with a time of 7:12.87, about 20 seconds behind first-place University of California, Berkley.

After the first day of competition, WSU Head Coach Tom Jager said he was satisfied with the results.

“We had a great start by having three very good medley relays,” Jager said in a WSU news release. “Then we finished the night with great effort in the 800 free relay. In Coug fashion, everyone lifted and we had one swimmer from each class, and they crushed the school record.”

The Cougs picked up 50 points during the second day of competition to put their total at 142, good for eighth place. Sophomore Ryan Falk reached a season-best in the 500-yard freestyle with a time of 4:50.49 for the fifth-fastest time in WSU history.

Freshman Kelly Morgan also had a top-10 school time of 23.25 seconds in the 50-yard freestyle.

Jager said after the second day he was proud of the performance of Margetts, who finished 21st in the 200-yard individual medley with a season best time of 2:01.57.

“Jasmine represented well on the 200 IM with a best time tonight,” Jager said in the release. “Then we finished up with a strong 200 free relay. It was a pretty young relay and they just missed the school record.”

Day three of competition was highlighted by freshman Emily Cook, who broke the school record in the 100-yard backstroke for the second time this season, the first occurring during the meet against Oregon State University. At the end of the day, WSU picked up 88 more points for 230 total in eighth place.

On the final day of competition, WSU added 77 points to their total with freshmen Taylor McCoy and Cook earning WSU top-10 times in the 200-yard backstroke. McCoy finished with a season-best time of 1:57.52, third in WSU history. Cook clocked a time of 1:58.27 for fifth-fastest in school history.

In the 1650-yard freestyle, Falk got a career best time of 16:50.30, fourth-fastest in WSU history. Five Cougars, seniors Anna Brolin and Talisa Wibmer, juniors Ciera Kelly and Penny Nichols and freshman Chloe Larson, had season-best times in the 100-yard freestyle.

The Cougars finished the championships by competing in the 400-yard freestyle relay. The team of Larson, Thompson, Morgan and Fores finished with a time of 3:21.12 for their fastest time in the event this season.