Demonstrators brave cold in support of wage increases for paras 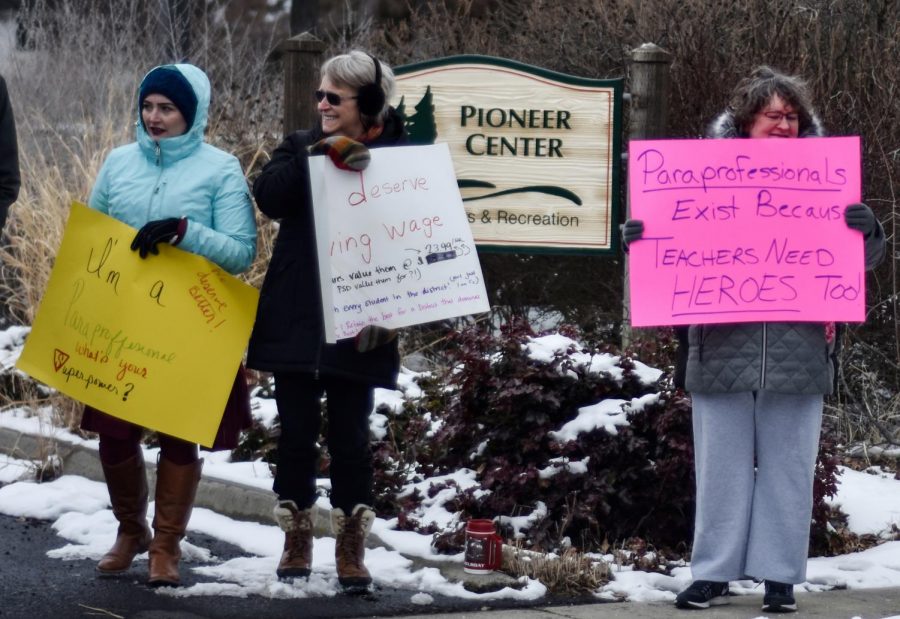 A group of about 15 gathered on Dexter Street in front of Pullman’s Pioneer Center on Friday to rally for higher wages and more paid leave for the school district’s paraprofessionals, commonly called “paras.”

Bundled in hats, mittens and thick coats to shield them from sub-freezing gusts, they waved and cheered when cars honked in support.

Paras work alongside schoolteachers in the classroom, helping teach lessons and providing specific help to distressed students and those with special needs.

“We’re doing just about everything a certified educator does and we’re not being paid for it,” Yelonda Wilke, Pullman Paraprofessionals Association president, said.

“We are losing para-educators to work in other places because we’re getting paid wages someone can get from working at McDonald’s,” Wilke said.

She said she could not go into specifics on what the association requested because of the nature of the negotiations, but the issue boiled down to increasing compensation.

“The children in our district deserve paras that are educated, experienced paras,” Wilke said, “paras that are happy and compensated for what they do.”

Bob Maxwell, Pullman Public Schools superintendent, also said he could not go into specifics, but was aware of the paras’ grievances.

“Our goal is to make sure our employees have a fair contract,” Maxwell said prior to a negotiation session Friday.

He said the district and the paras’ association have not reached an agreement after about two years of negotiations.

The parties agreed in late 2017 to bring in a negotiation mediator from the state Public Employment Relations Commission to keep the process moving. They did not come to a contract agreement after a 12-hour session in January.

After about five hours of negotiating Friday night, Wilke said, paras still did not have a working contract with the school district.

Paras will have to wait until April for the next round of mediation, according to the district’s website.

The demonstrators shivered and traded hand-warmers on the sidewalk in front of the Pioneer Center before Friday’s negotiations.

“We’re just going to continue to fight for what we believe we are worth,” Fleener said, “what we are worth to our co-workers, to the teachers, to the students and the Pullman School District.”

Fleener, who was part of the paras’ negotiating team, said she worked with children before starting in the district six years ago.

“I’ve been working in child development for many years in various positions,” she said. “This is where my heart is.”