WSU looks to avoid second defeat at hands of Oregon 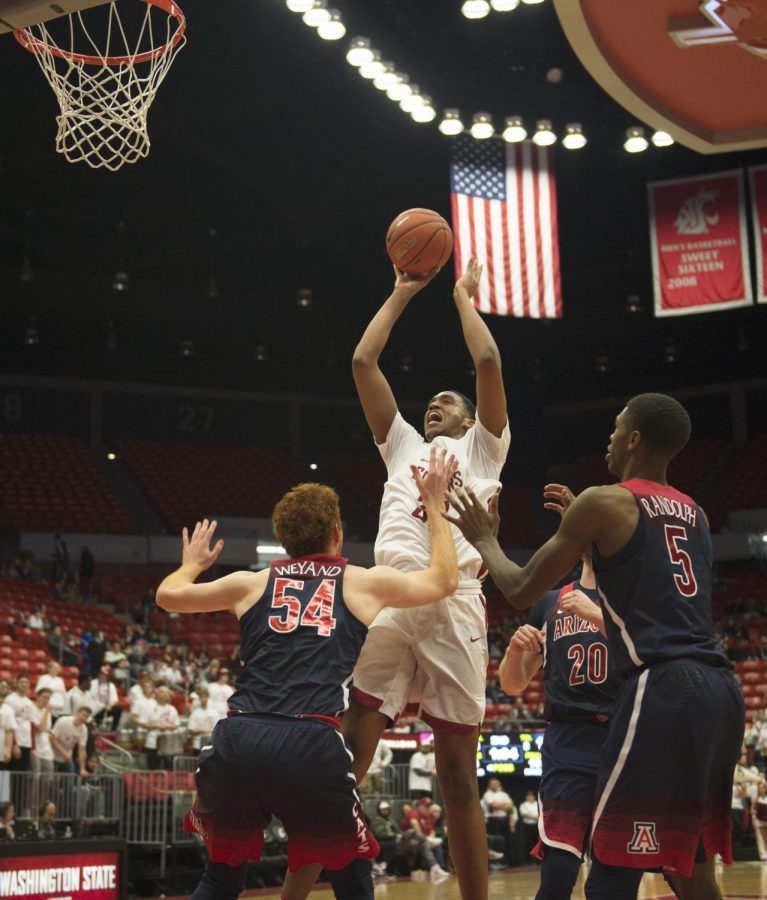 Junior forward Davante Cooper jumps as he shoots the ball over Arizona defenders on Jan. 31 at Beasley Coliseum. WSU lost 100-72.

WSU men’s basketball will take on University of Oregon today to begin its final homestand of the season.

The Cougars (11-17, 3-13) come into this matchup against the Ducks (19-10, 9-7) after notching their first conference road win against University of California, Berkeley, followed by a two-point loss to Stanford University.

Redshirt senior forward Drick Bernstine said this season has not gone how the team wanted. But despite disappointing losses, he said the Cougars are playing their best basketball right now, and everyone is 0-0 when the Pac-12 Tournament starts.

“We’re really all coming together and getting in a rhythm these last four or five games,” Bernstine said. “We’re starting to know how to play with each other and that’s helping us for sure.”

Last time out against Oregon, the Ducks had 11 steals and outscored the Cougars 21-3 in fast-break points. Junior guard Viont’e Daniels said most of those turnovers came from the full-court press Oregon ran, and a lack of awareness.

Daniels said the team has been practicing breaking the press all week and will be better prepared to deal with it this time around.

“We can’t be lackadaisical or scared, we just need to attack the press,” he said. “If we take away those turnovers, it creates a lot more opportunities for us to score.”

Fast-break scoring was not the only area the Ducks beat the Cougars in during their first matchup. WSU was also out-rebounded 34-28, and gave up 30 points in the paint, compared to its 12 points scored.

Bernstine credited some of those struggles to junior forward Robert Franks missing that game. He said Franks brings a mentality to rebounding that the rest of the team has been working to emulate.

“We need to be a lot tougher,” Bernstine said. “We’ve been working on defensive rebounds so we don’t give up [offensive] boards or second-chance points.”

Daniels said they need to focus on corralling Pritchard, regardless of who is guarding him. He said it is a team effort to make sure he doesn’t get open looks.

“[Pritchard] loves pushing the pace as soon as they get the ball off of misses or makes,” Daniels said. “He’s their go-to guy. He’s been to the Final Four and knows what it takes to win.”

Daniels said it will be monumental for the Cougars to have Franks for this game, because he brings a lot more than just scoring to the team when he’s on the court.

The last time WSU played the Ducks, Daniels said their offense was stagnant and didn’t move the ball much. But Franks can drive and kick out to open shooters, he said, which will create more spacing on the court.

Bernstine said having multiple streaky shooters on the court at the same time makes the Cougars difficult to defend, especially when one of them starts knocking down shots.

“For me, I just think about what will happen when they all get hot,” Bernstine said. “I’m hoping that comes going into this homestand and the Pac-12 Tournament.”

Tipoff is set for 6 p.m. Thursday at Beasley Coliseum. The game can be viewed live on ESPN2.