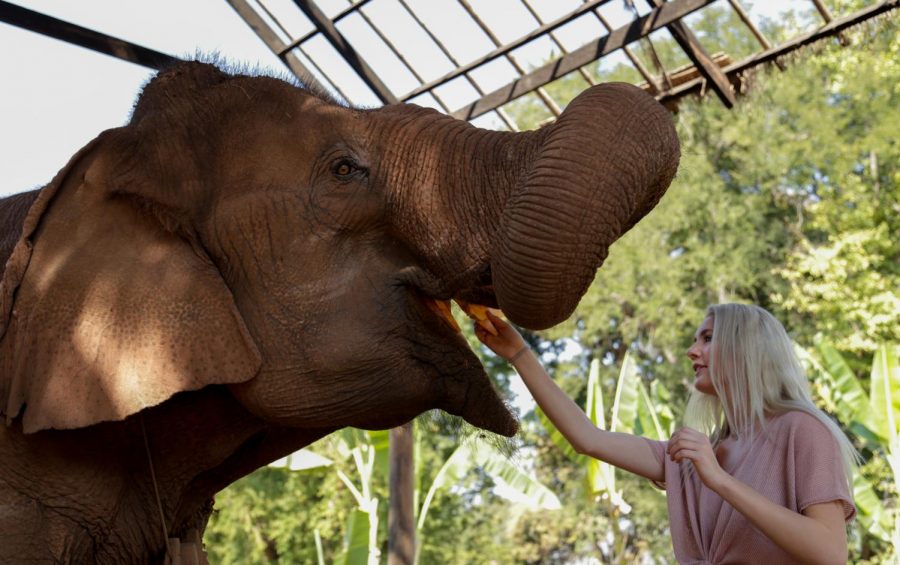 I never thought one day I would run my hands along the rough, wrinkly skin of an elephant. While in Myanmar we visited the Green Hill Valley Elephant Sanctuary just outside of Kalaw.

The owners of Green Hill Valley strongly believe in an ethical environment when it comes to their elephants. The sanctuary was created to help rescue abused elephants in the area and inform locals about the lasting damage of abuse. They currently house eight elephants and utilize a mobile veterinarian unit to assist other elephants in the area.

We started off our day at Green Hill Valley by meeting two four-ton elephants. As they towered over each of us, I was instantly taken aback by their size. Terrified, I approached animals that could easily squish me without blinking an eye. They were named Yu Moe Yin, 48 years old, and Moe Kathare, 68 years old.

The moment I put my hand on Yu Moe Yin’s trunk — more like a bristly leather glove than skin — and gave her a bit of food, I felt an instant emotional connection. Her soft eyes, deep brown and lined with long eyelashes, were surprisingly gentle for such a huge creature.

Her tongue was larger than my entire hand, and coated in a layer of slimy saliva. After I fed Yu Moe Yin and pet her trunk, she thanked me with a nod and a flap of her ears.

While being worked in the logging industry, Shu Lay War experienced an injury that rendered her left eye useless. It was presumed a branch hit her while she was carrying logs through the forest. Despite this, Shu Lay War was incredibly trusting and allowed each of us to approach her, pet her trunk and feed her.

Hmin Sit Wai suffered from a gunshot wound to her left shoulder and a dislocated right hip. For her, sitting down is extremely painful. She is forced to use her other legs a strenuous amount, causing even more problems.

Hmin Sit Wai pushed through her pain and was one of the most flamboyant elephants in the sanctuary. She loved being fed, and would lift her trunk and curl it to her forehead as an indication of when she wanted more food. When we obliged, she would flap her ears excitedly in a spectacular display of gratitude.

As the day came to a close, we were offered the chance to bathe Htun Mama, a 35-year-old female. We walked to a nearby river with Htun Mama’s footsteps thundering after us. She effortlessly waded into the rushing river and spewed out water with her trunk.

Htun Mama and her handler found an inlet of calm water just below a waterfall where she could sit down. She slowly lowered herself into the water as each one of us filed in and surrounded her with “elephant shampoo,” in hand, which was banana tree bark.

We scrubbed her gingerly at first, not wanting to cause any harm. Then the handlers showed us you actually need to put some effort into cleaning her thick skin.

They leaned forward, extended their arms fully and then snapped them back to their stomachs, furiously scrubbing her 18-millimeter-thick skin. I worked my way counterclockwise around Htun Mama starting from her head.

I noticed that the skin just behind her shoulder was the softest. Aside from the rough hair strands, which reminded me of porcupine needles, it felt almost like human skin.

I moved on and started shampooing her right hind leg. Since it was mostly underwater, I had to lean over to get to it, my shoulder fully submerged. As I scrubbed I noticed something brush up against my elbow.

I stood up to see if a fish was swimming around us, and that’s when I noticed a large peanut shape in the water the size of a coconut. I quickly realized Htun Mama had just defecated, and there was more still coming. I burst into laughter at my misfortune, as did everyone else.

The inlet kept the feces swirling around in the small pool, prompting a few of the group members to exit the water for fear of touching the poop. I continued to laugh and just hoped that Htun Mama didn’t do that out of annoyance for me.

Once Htun Mama was all clean, she got up and moved back down the river. We all waved her goodbye and thanked the handlers for letting us help clean her.

Green Hill Valley Elephant Sanctuary showed elephants for the gorgeous animals they are, and the workers often pointed out to us how similar elephants are to humans: They live to similar ages, have families they travel with and take care of and have a wide variety of personalities and strong emotions. They feel just as much as we do.

The Green Hill Valley employees understand this and hope these encounters will help bring awareness to the needs of these magnificent animals.