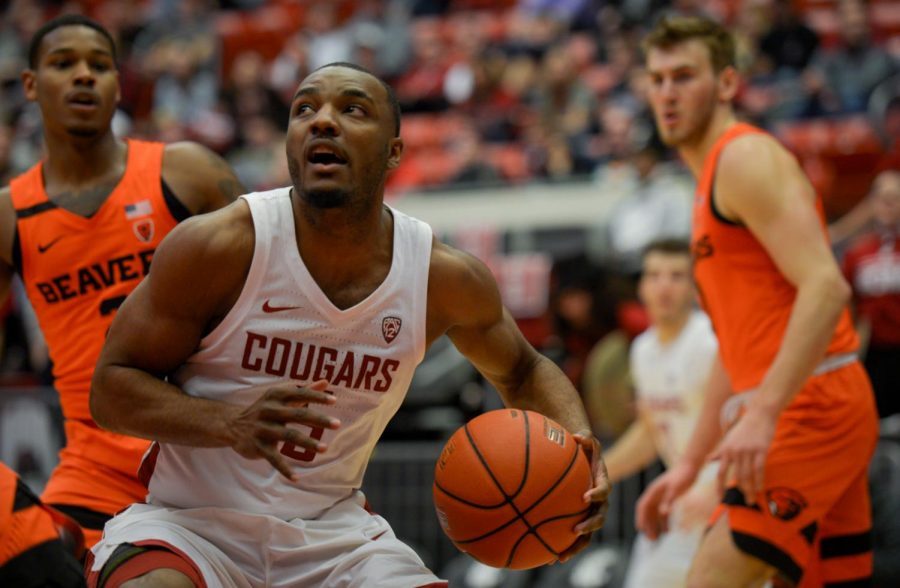 Milan Acquaah attempts to slip past an OSU guard Wednesday in a game at Beasley Coliseum.

WSU men’s basketball controlled the game for most of the night but let its lead slip late resulting in a 64-62 overtime loss to University of Oregon in the first round of the Pac-12 tournament on Wednesday.

Oregon got out to a slow start, allowing the Cougars to lead by as many as 10 points in the first half. None of the Ducks could find a rhythm from the field. As a team, Oregon finished the first 20 minutes shooting a touch below 30 percent with a season-low 17 first-half points.

While Oregon came out of the gates sputtering, WSU found their stroke after a few minutes of play. Junior forward Robert Franks, fresh off a Pac-12 Most Improved Player of the Year award, led the way for the Cougars to start. He hit two deep three-pointers and racked up 10 points in the first half.

The Cougars hot shooting only lasted so long as they closed out the half on a four-minute scoring drought where they missed their last six shots. As for the Ducks, their shooting woes continued as they finished the half with a scoring drought of their own, lasting three minutes.

In the second half, the Ducks sped up the pace of play with a full-court press, which caused the Cougars to commit eight second-half turnovers.

With the Cougars struggling to find much offensive success, Oregon slowly closed in on WSU’s lead. Oregon would take the lead for the first time when sophomore point guard Payton Pritchard hit his fourth three-pointer of the game with about two minutes left.

With less than a minute left and the Cougars down by three, sophomore point guard Malachi Flynn rolled over the top of a screen to catch and shoot a long three-pointer to tie the game up and eventually send it to overtime.

Late in the overtime period, Pritchard took Flynn to the rim and finished to give the Ducks a one-point lead. Flynn tried to counter with a drive of his own but was met at the rim by freshman center Kenny Wooten. WSU would end up fouling Pritchard, sending him to the line with 10 seconds left.

Pritchard ended up missing both of his free throws, but the Ducks would land on the loose ball. WSU then sent Oregon’s freshman guard Troy Brown to the line for two more free throws, where Brown would hit one of two.

Down just two points after Oregon had missed three of its four free throw attempts, redshirt freshman guard Milan Acquaah attacked the basket but was met at the rim yet again by Wooten to seal the loss for WSU and put an end to the Cougars season.