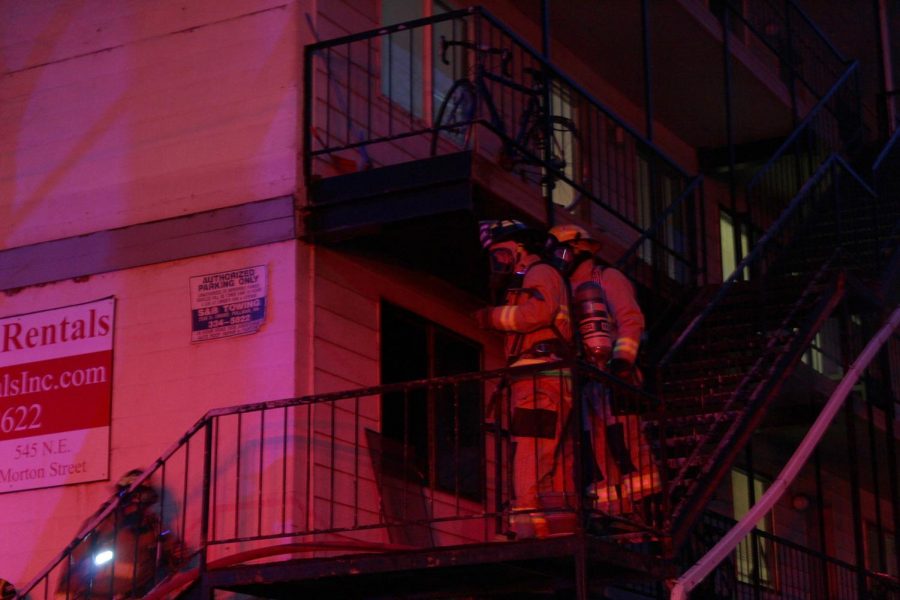 Fire fighters responded to two separate blazes within minutes of each other Thursday night.

A fire caused significant damage to a 32-unit apartment at NE Morton Street on Thursday evening.

Pullman Fire Chief Mike Heston said the apartment building was evacuated and there were no injuries to people or animals during the blaze. He said the residents were not home.

The unit that burned was on the second floor in the corner apartment on the edge of the building.

Firefighters responded at about 5:50 p.m. and saw flames coming from the windows and doorways of one of the units, according to a news release.

Heston said they knocked the fire down from the outside of the apartment, then went in to finish putting it out.

“Looks like the fire was mostly in the kitchen area,” Heston said. “No one was home, they weren’t even cooking.”

Deputy Fire Marshal Tony Nuttman investigated the cause of the fire and determined it was accidental. A pot of cooking oil was left unattended on the stove, causing heavy fire damage to the kitchen area and moderate smoke and water damage to the front room and hallway of the apartment. There were no working smoke detectors found in the department, according to the news release.

Red Cross offered assistance to displaced residents were, but they said they had made other living arrangements, according to the news release.

At about the same time, another fire broke out on NE Cleveland Street on Military Hill.

Pullman Fire Marshal Chris Wehrung said it was a cooking fire caused by grease left on the stove. They believe a cat turned on the stove top while residents were not around. Wehrung said the fire did not cause any damage or injuries.

Heston said with two ongoing fires, they were able to respond quickly.

This story is being updated as information comes in.