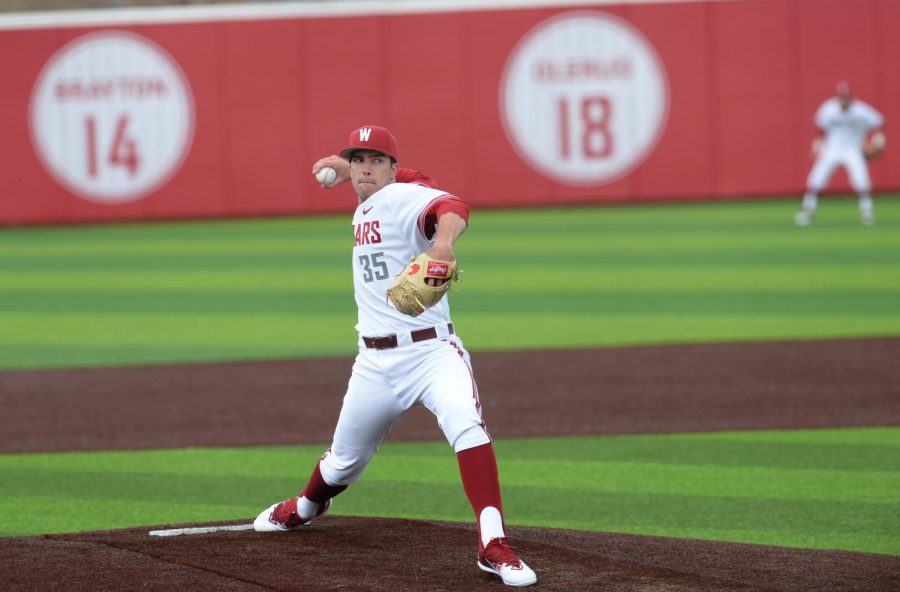 WSU baseball defeated Saint Mary’s College of California 7-6 in the bottom of the 11th inning on an errant throw by the Gaels on Thursday in the Cougars’ home opener.

Sophomore infielder Dillon Plew was on first base when he attempted to take off to steal second, and Saint Mary’s (7-4) sophomore left-hander Nick Sparks aimed to throw Plew out.

Sparks’ toss to second base slipped past the infielder and found its way to centerfield, allowing Clanton to score the walk-off winning run from third base.

“It went exactly as planned,” Plew said. “Just how we wrote it up.”

The game found its way to extra innings due to clutch defensive plays and hitting by both teams.

In the bottom of the third inning, WSU added to its lead with a bases-loaded walk by sophomore catcher Cal Waterman. Head Coach Marty Lees said Waterman has consistently had quality at-bats that don’t show up in the box score.

“Cal puts a lot of time into his swing,” Lees said. “He has had very good plate appearances and is just finding a way to get on base.”

Junior right-handed pitcher Nick Strange came in the fourth inning to relieve senior right-hander Collin Maier. Maier faced five hitters in his relief appearance with the first two getting on base from a walk and hit-by-pitch. The next batter laid down a perfect bunt for a base hit, followed by a sacrifice fly by Saint Mary’s freshman outfielder Jack Murphy.

With the Cougars’ one run lead, Strange faced Saint Mary’s junior third baseman Dylan Robertson. Robertson hit a three-run homer to give the Gaels a 4-2 lead.

WSU had several opportunities to put more runs on the board, leaving a total of 17 runners on base in the game. Saint Mary’s brought a 6-3 lead into the bottom of the seventh inning, when the Cougars threatened again.

Saint Mary’s freshman right-handed pitcher Michael Hobbs entered the game to face the top of the Cougars’ order with the bases loaded and no outs in the bottom of the seventh. Hobbs got junior shortstop Andres Alvarez to pop out, and with one out and the bases-loaded Plew stepped into the batter’s box.

Plew came off the bench earlier in the game in the exact same situation and grounded into a double play.

“It’s tough coming off the bench because it’s cold, windy and raining,” Plew said, “but you just have to keep yourself in the game.”

Plew did just that as he hit a bases-clearing three-run double to right field to tie the game at six runs apiece. Senior right-handed pitcher Ryan Walker came in for the Cougars and threw two and two-thirds innings and had three strikeouts.

WSU was unable to string anything together after the Plew double in the bottom of the eighth, and continued to rely on their pitching.

This took the game into the 11th inning, when Cougar senior left-hander Cody Anderson came in. Anderson retired all three batters he faced and earned the win for WSU.

“It was a complete team effort,” Lees said. “I think we can get better.”

WSU will host Saint Mary’s for the second game of the series 2 p.m. Friday at Bailey-Brayton Field. The game can also be seen on the WSU Live Stream.