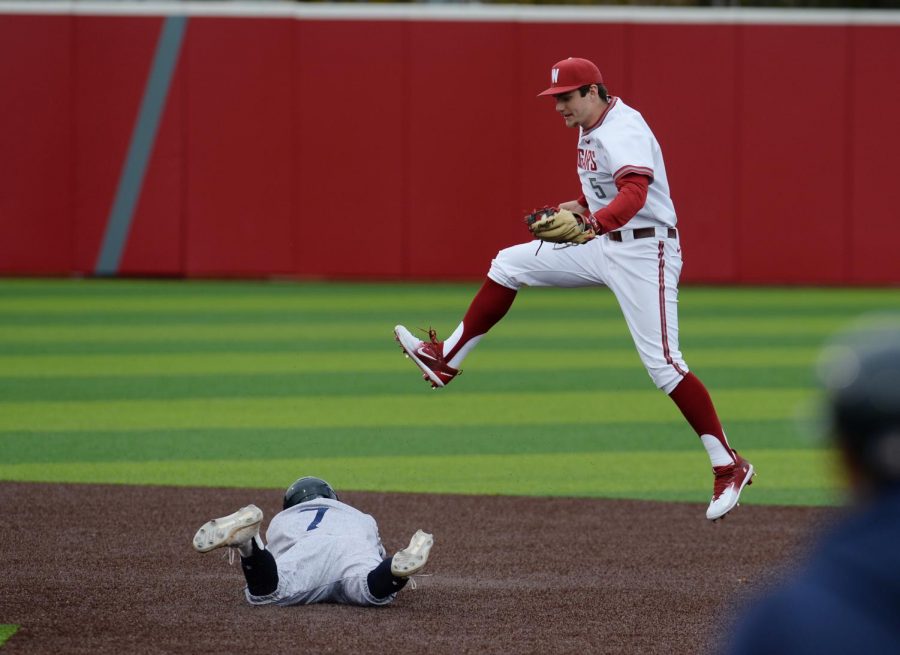 Junior infielder/outfielder Justin Harrer jumps to catch the ball as he attempts to tag out sophomore outfielder Joe Vranesh as he slides into second during the game against St. Mary's Thursday afternoon at Bailey-Brayton field.

WSU baseball took the third game of a four-game series against Saint Mary’s College of California on Saturday in yet another one-run game between the teams.

Senior left-hander Scotty Sunitsch started for the Cougars (4-7) and went a career-long seven innings allowing just one run against the Gaels (8-5).

Saint Mary’s hit a pair of infield singles, used a sacrifice bunt to advance the runners and capitalized on a WSU error to score their one and only run of the game in the top of the first inning.

In the top of the second inning, the Cougars did something that hadn’t been done by a WSU team since 1999. They got out of a jam that saw runners on first and second with no outs by turning a triple play, started by WSU sophomore catcher Cal Waterman.

Sunitsch settled in after his first two innings and kept the Gaels from crossing home-plate, handing the ball over to senior right-handed closer Ryan Walker.

Walker got a double-play to end the eighth-inning, and retired all three batters he faced in the ninth-inning to get his first save of the season.

Freshman infielder Jack Smith extended his hitting streak to eight games with a single in the bottom of the first-inning.

First pitch of the fourth and final game of the series is scheduled for noon Sunday at Bailey-Brayton Field.