WSU scored only run of game in bottom of ninth inning 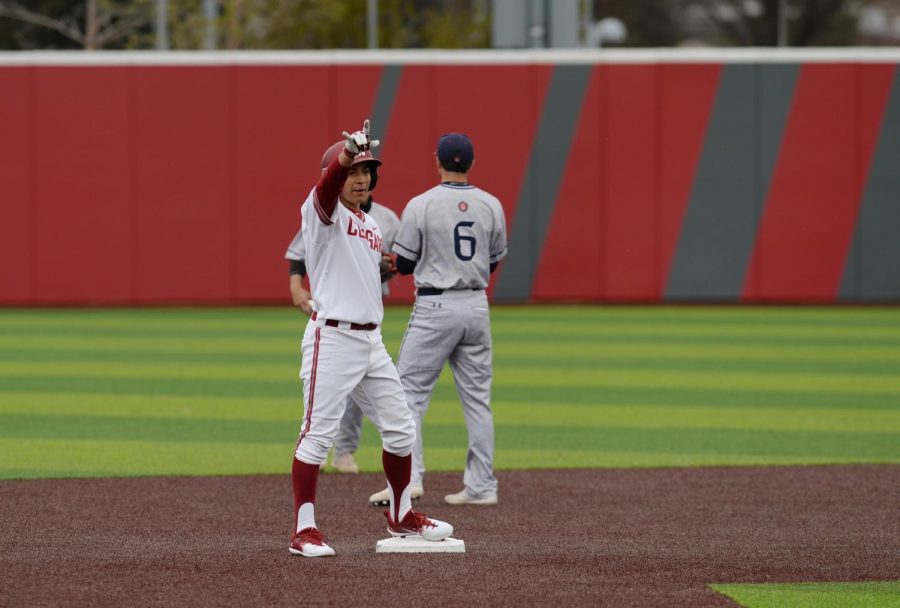 Junior infielder Andres Alvarez celebrates after hitting a double during the game against St. Mary's Thursday afternoon at Bailey-Brayton field.

WSU baseball fell 3-1 to Saint Mary’s College of California on Sunday in the fourth and final game of the series.

Senior left-handed pitcher Cody Anderson got the start for the Cougars (4-8) against the Gaels (9-5). Anderson went into the eighth inning, giving up only two runs.

The two runs came on a two-out single into left field in the third inning to put the Gaels up 2-0. They would hold this lead until the ninth inning.

Anderson struck out four batters and kept WSU in the game against Saint Mary’s but Gaels sophomore left-handed pitcher Ken Waldichuk was too much.

Waldichuk silenced the Cougars bats in his seven innings of work, tallying 12 strikeouts and only allowing two hits.

The Cougars threatened in the bottom of the sixth, when sophomore infielder Dillon Plew and junior infielder Justin Harrer both hit singles. This put runners on first and third with two outs for WSU.

However, Waldichuk ended the threat with his 11th strikeout of the game, keeping the lead at 2-0 for Saint Mary’s.

The Gaels would add to their lead in the top of the ninth inning against WSU junior right-handed pitcher Parker McFadden.

Trailing 3-0 heading into the bottom of the ninth, it was the last chance for the Cougars. WSU had the middle of its lineup set to face Saint Mary’s freshman closer Michael Hobbs.

Harrer led off the ninth with a triple down the right-field line and later scored on a wild pitch to cut the lead down to two runs. Hobbs shut down the Cougars after that and got the final three outs of the game to secure the victory for the Gaels.