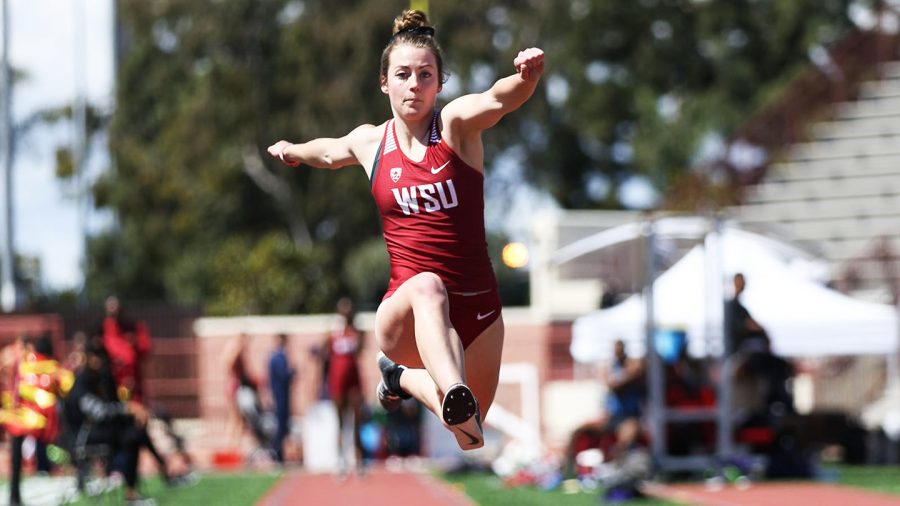 Redshirt senior long triple jumper Greer Alsop participates in the women’s triple jump Saturday at the USC Trojan Invitational. She won the event with a distance of 12.32 meters.

WSU track and field had its first outdoor meet of the season this weekend when they traveled to Southern California to compete in the USC Trojan Invitational.

Redshirt sophomore Aoife Martin came in fourth place in the women’s hammer throw with a distance of 53.57 meters. WSU’s only discus thrower, redshirt senior Tyler Jackson, came in 11th with a final throw of 44.86 meters.

“Every jump I felt like I was getting a little closer to being technically sound,” Alsop said in a WSU news release. “I gave [assistant] coach Ryan [Grinnell] a couple heart attacks from almost falling in the first jump, then fouling four jumps in a row and finally pulling it together on the last jump.”

On the men’s side, junior Robby Flores finished fourth with a final distance of 14.36 meters.

In the women’s 4×400 meter relay, a team consisting of redshirt senior Alissa Brooks-Johnson, freshman Jelena Grujic, junior Stephanie Cho and senior Marlow Schulz finished in third with a time of 3:43.96.

Schulz finished second in the women’s 800 meter dash with a PR time of 2:09.05, and redshirt sophomore Molly Scharmann placed third in the women’s pole vault with a final height of 3.70 meters.

Wayne Phipps, director of cross country/track and field, said the Cougars performed at a high level across a number of events.

“I thought it was a great opener with a number of marks that should ensure an NCAA first round qualification,” Phipps said in the release. “Brock [Eager] and Amani [Brown] got everything started on the right note with a great opening throw.”

After a successful start to the outdoor season, WSU will get ready to compete in the Whitworth Sam Adams Classic this Thursday and Friday in Spokane.