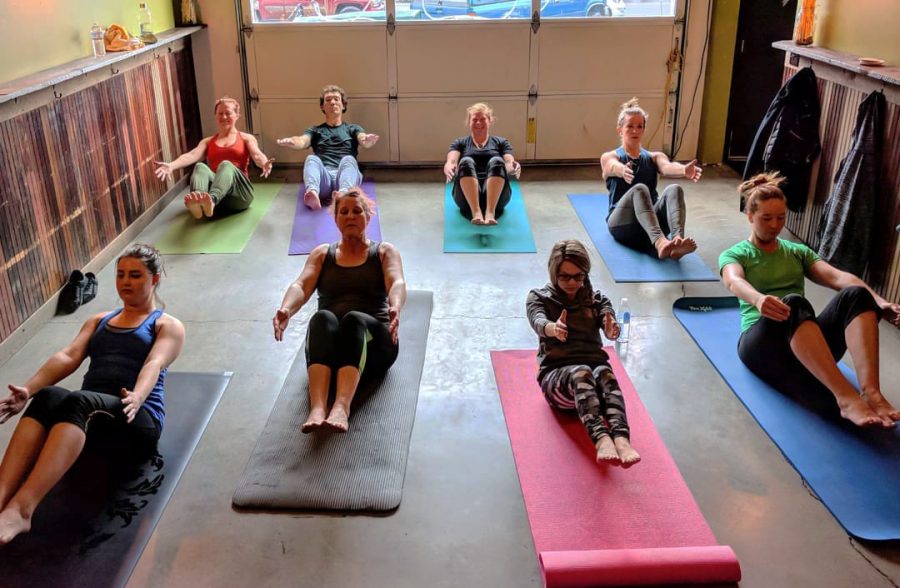 While beer is a perk of the hour-long yoga session, Severson said he wants participants to experience real health benefits.

Beer yoga has many names. Some call it “boga” or “stretch and brew.” But for the owner of the Moscow Brewing Company, Andy Severson, beer yoga is for gathering outside of normal brewing hours to attend an easygoing yoga class.

While Severson may eventually include beer drinking in the actual class, the event now provides a space for people to attend an afternoon yoga class and then receive a beer after the hour-long session. He said the popularity of yoga in the community is what propelled the event.

“We’re a local brewery, a local business, always trying to find ways to reach out and enrich what we do in the community,” Severson said.

Though students may already have access to yoga centers and fitness classes in the Moscow-Pullman area, Severson said beer yoga introduces “beer people” to an experience they can have about beer without it being the sole focus.

“It was really interesting because it was yoga people who wanted to try out a new place,” Severson said. “Beer people who didn’t know anything about yoga just wanted to do an outside-the-norm activity.”

Severson said anyone in the community can get involved.

“Our instructor does a really good job at bringing people in,” he said, “and people who have never done yoga find they can keep up.”

The instructor, Lauren Keeney, is a longtime friend of the Moscow Brewing Company. After Severson decided to push forward with the event, he knew Keeney was a registered yoga teacher and approached her with the idea. Keeney offers other classes at local studios, and wants to keep the classes simple and approachable for people who are unsure of themselves.

Severson said he is interested in expanding the program once the weather warms to include other fitness and outdoor programs. As of right now, though, he’s happy with exposing people to beer yoga.

“We try to express to people that it’s supposed to be entertainment, help you relax, stretch, feel better physically, calm you spiritually and mentally,” he said.

The event is meant to be low-key and comfortable for the participants, especially because Severson knows some may feel awkward about it.

“It’s a smaller space, so it’s not that you’re one of 50 people in the class,” he said. “You’re right there, an arm’s reach away from the people around you. [Keeney is] able to give you a lot of one-on-one attention that allows you to add on to beginner poses.”

Though the beer is an added bonus, Severson said. The yoga has a distinct health focus, and the event is not just about drinking in the early afternoon.

“We want to make sure the people who come get something out of it,” Severson said. “We want people to experience something like this, at a creative venue, and leave feeling like they benefitted.”

He said the class members left smiling and laughing after the first session with their overall stress level down. They were ready to go about their Saturday from a relaxed standpoint.

The next beer yoga class will take place at noon on March 31 at the brewery. Anyone interested can sign up on Moscow Brewing Company’s website for a $15 fee, which pays for the class and a pint of beer. Participants who can’t stay after the session for a beer can take a ticket and redeem it at any other time for their pint.

“The afternoon time works out nice because after the class, the yoga group just hangs out and drinks a beer together before opening,” Severson said. “It keeps the day open and you don’t have to wake up early to do yoga.”