Men’s golf gears up for tournament in California 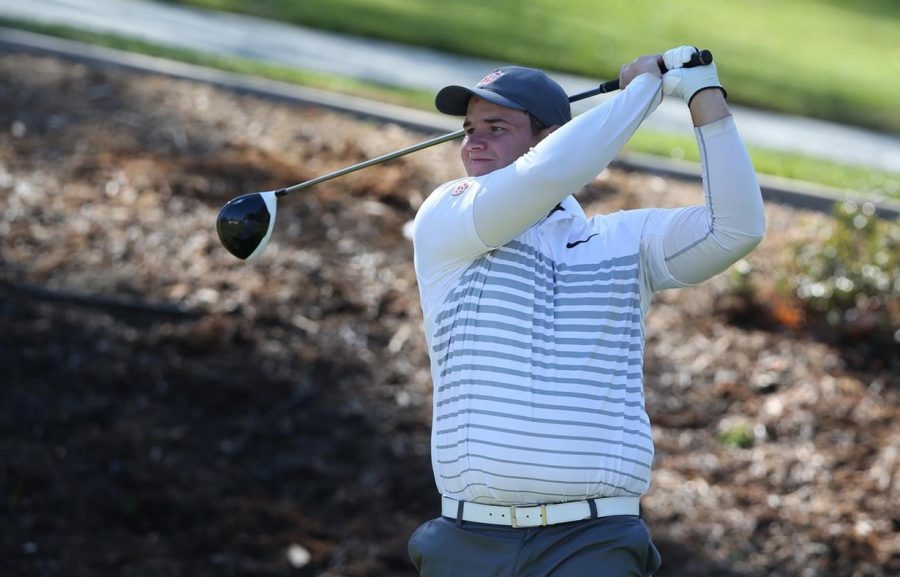 Senior Derek Bayley holds his follow through after one of his drives at the Bandon Dunes Championship in Oregon earlier this month.

After an impressive showing at the Bandon Dunes Championship last week, WSU men’s golf looks to carry their momentum into the Bighorn Invitational on Friday and Saturday.

Hosted by Kansas State University, the event will take place at Canyons Course in Palm Desert, California. Players are set to play two rounds Friday, then play an 18-hole final round Saturday on the 7,000-yard par 72 course.

Capped off by a final round at Bandon Dunes with a 281 (-3), WSU shot under par as a team in each of the three rounds for the first time away from home since the Barona Collegiate Cup in 2004.

The Cougars’ third-place finish at Bandon was the team’s best result away from the Palouse since the PING Cougar Classic in the 2015-16 season.

Bayley led the team throughout and was the tournament runner up, shooting 201 (-12) after three rounds of play, tying his best-ever tournament score. Bayley finished just one stroke behind Arizona State sophomore Chun An Yu who shot a 200 (-13).

Armstrong continued to contribute for the Cougars, claiming 15th place with an overall score of 212 (-1). Armstrong had an impressive first two rounds, but shot three over in the final round, dropping down the leaderboard and claiming the Cougars a second-best score out of WSU’s five golfers.

Mogg tied for 20th place, shooting even par over three rounds of play. Anderson shot his lowest score of 71(-1) in the final round, sliding him down to 33rd with an overall score of 216 (+3).

The Cougars are set to begin the Bighorn Invitational 8 a.m. Friday with a shotgun start and will be looking to continue improvement as the Pac-12 Championships draw closer.