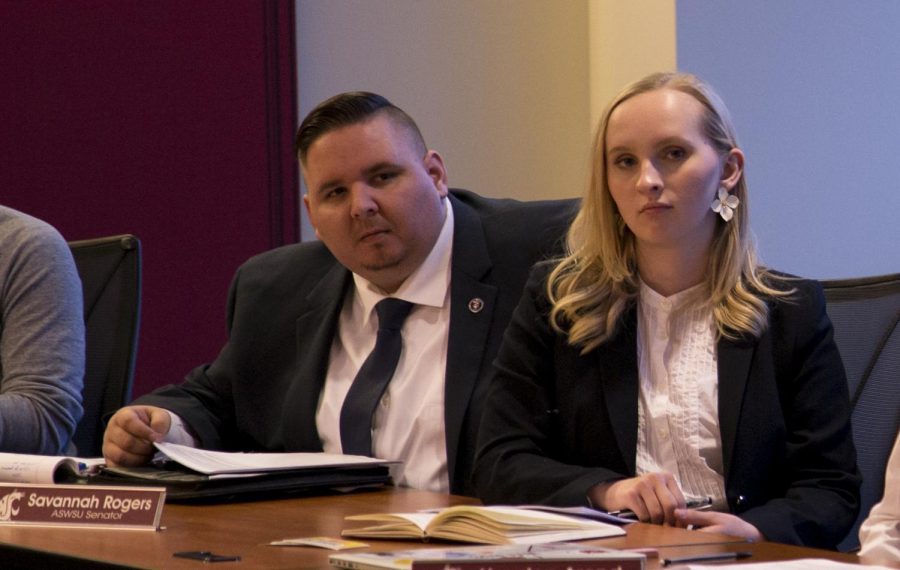 ZACH RUBIO | The Daily Evergreen James Dalton, left, and Savannah Rogers watch a new judge get sworn in at an ASWSU meeting Wednesday at the CUB.

ASWSU senators passed a resolution asking WSU officials to implement a policy that would remove sexual history as a factor in student conduct proceedings.

The policy is one of 32 recommendations a WSU task force made for the Student Conduct process after a year-long review. The task force consisted of 17 WSU faculty, staff, students and alumni.

Arts, Sciences, Veterinary Medicine and Pharmacy Sen. Jacob Lizarraga, one of the bill’s authors, said the policy would remove sexual history from being admissible in student conduct proceedings.

“I think this is an excellent way for us to work against, for lack of a better word, ‘slut shaming,’ ” he said.

According to the resolution, the sexual history of the complainant should not be used as evidence for whether a sexual interaction was consensual or to assess their credibility.

“Other than that, it’s not admissible as evidence,” co-author and All Campus Sen. Savannah Rogers said.

The resolution, in addition to asking WSU President Kirk Schulz and the WSU Board of Regents to enact the policy, calls for WSU students, staff and faculty to become educated on the new policy. It also states that the OEO website and resources should explicitly note the policy.

“I want it to be in bold on the front page right before you report something,” Rogers said.

All Campus Sen. James Dalton said he went to the unveiling event for the conduct process recommendations and was surprised to find out they didn’t already exist. He said the policy is the type of thing you don’t think or worry about until you need it.

“This is definitely important,” Dalton said, “and if it passes, I’d like to see it sponsored by the entire Senate.”

ASWSU senators unanimously passed the resolution after expanding sponsorship to include all of them.

Warren said an hour before the Wednesday meeting, the incident potentially could have lost them their presidency, but as of the meeting, the only consequence would be that O’Dea or the Rogers-Parchem campaign would have to pay the fair market value of the posters, about $28. There will be a hearing about the incident 7:30 p.m. today in CUB, Room 206.

Senators at the meeting passed two bills they hope will improve communication among ASWSU officials. One of the bills modifies the Department of Communication to include a second deputy director.

The other bill makes ASWSU branch heads attend monthly meetings with the President and Pro Tempore. College of Agricultural, Human and Natural Resource Sciences Sen. Lindsay Schilperoort, the bill’s author, said the meetings would keep all of the branch heads in the loop. She said one of the biggest areas for improvement is communication.

“This is one of those things that is going to make it better,” Schilperoort said.