Pitcher wears his heart on his sleeves, in his pocket

As part of superstition, senior has grown out hair since high school 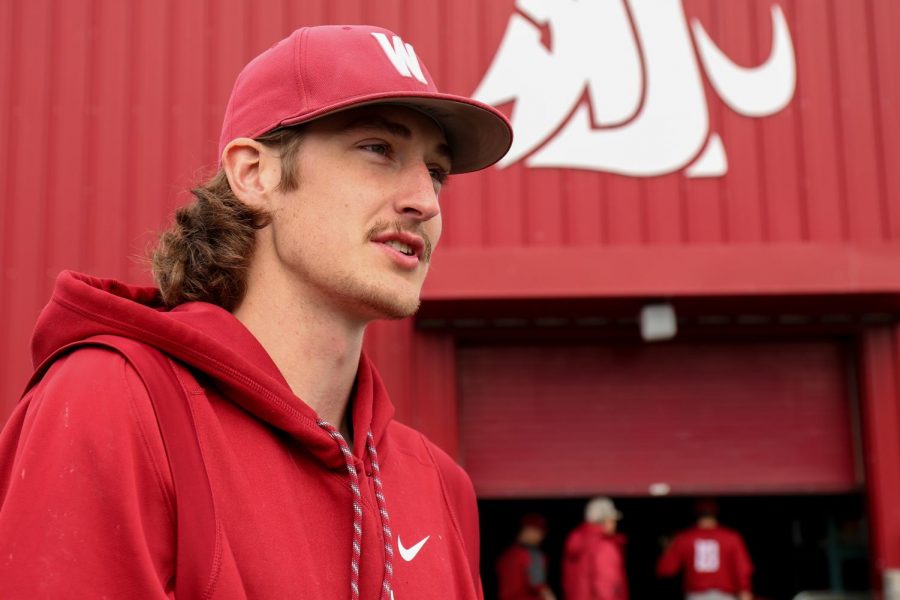 Cody Anderson, a senior left-handed pitcher, explains what it means to be a leader for his team and talks about the handkerchief he puts in his back pocket during games to remember his grandparents.

He’s not the kind of guy that is going to catch the eyes of MLB scouts with a high-velocity fastball, but senior pitcher Cody Anderson takes pride in deceiving opposing batters.

Head Coach Marty Lees said Anderson brings his best every time he steps on the mound.

“The one thing you can count on from Cody is that he is going to be prepared to pitch and compete at a high level,” Lees said. “He probably doesn’t have the stuff that many other weekend starters have in our league, but what he does have his the competitive spirit. He really wants to win, he studies the team, he knows who he is and he doesn’t try to pitch like someone he isn’t.”

Anderson modestly describes his fastball as an 80-85-mile-per-hour pitch. Certainly not an eye-popping number, let alone one you would expect to come from a pitcher that leads his staff in strikeouts.

Anderson characterizes himself as “crafty,” a common niche for left-handed pitchers who don’t possess the upper-level velocity that wows scouts.

His 6-foot-6-inch frame provides for a loopy windup that he uses to fool hitters. Anderson uses a conventional overhand release, as well as a sidearm release that caters to his breaking pitches. He has a standard repertoire of pitches, with a fastball, curve, slider and change-up.

“I just kind of play the mind games,” Anderson said. “Baseball is just like a book, you just have to speak the language and the game will tell you everything you need to know. It’s just are you able to read it and do you know what its saying.”

Anderson said he focuses on studying the tendencies of his opponents to prepare for each game.

“I’ve had to make up for a lack of physicality and stuff,” he said, “so that’s the way I have done it through the mental preparation.”

The special education major, like many baseball players, is superstitious.

Growing up, Anderson’s family wasn’t keen on long hair. For most of his life, he sported a buzz cut.

Then, in Anderson’s junior year of high school, he decided to defy his family and grow out his hair. He called it a “really bad look,” but he saw his performance on the field skyrocket.

Looks have never been a huge concern for Anderson — all he wants is a win for his team.

“Over the years I found correlation between my performance and my hair length,” Anderson said. “Whatever gets it done on the field and helps my boys win, I’m all for it. I couldn’t care less. If I got to look ugly to wins games, that’s how she goes.”

Anderson doesn’t wear his other superstition on his sleeve quite like he does his hair. He puts a handkerchief in his back left pocket during all of his outings, and the item carries a great deal of sentiment to him.

It belonged to Anderson’s grandfather, John Faulkner, who passed away in 2013. He uses the thin piece of fabric to remind himself that his grandparents are watching over him.

“He was someone I was close to growing up,” Anderson said. “I just like to pitch with his handkerchief in my pocket, it kind of lets me take him out there with me.”

This season, Anderson hasn’t gotten the results he wanted in terms of wins and losses, but he has come out of the gates posting impressive numbers. He leads the Cougars staff in innings pitched and strikeouts, while boasting the lowest ERA and opposing batters average among the starting rotation.

“It is definitely frustrating, but we’re fighting and we’re sticking together,” Anderson said. “The sun’s going to come up tomorrow. We got another game, so you can’t worry about the past.”