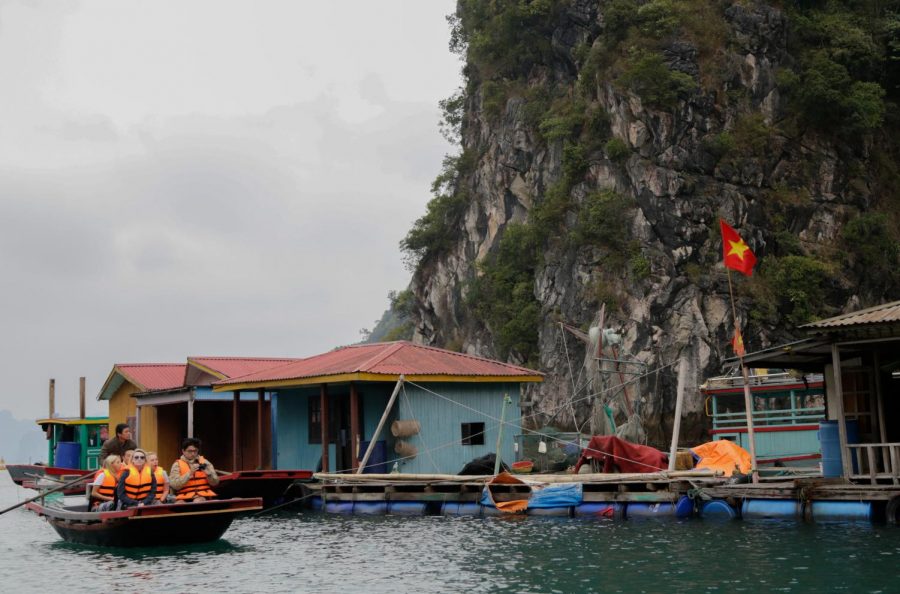 The houses are made out of wood and tin roofs, and sit atop blue barrels filled with air to help keep the structures afloat.

I’d become so familiar with waking up to the smooth rocking of a boat that when we pulled up to Ha Long Bay, Vietnam, in a small passenger boat, I almost forgot I was no longer on the huge MS Deutschland in the middle of the Pacific Ocean.

I looked out my window and saw the iconic rock formations that make up Ha Long Bay. The rocks towered over any vessel that sailed through these calm, cool waters. Covered in foliage and a thick layer of fog, it was as if the rocks were from a different planet.

We had spent the previous day taking photos and kayaking from beach to beach. But today, we were going to the floating fishing village of Cua Van, the largest of its kind in Vietnam.

I didn’t know what to expect from a floating fishing village, but when we arrived, I was immediately intrigued. The entire village was composed of wooden boats with tin roofs, all built on top of what could best be described as docks. Large sections of the docks were tied together, connected by blue barrels filled with air to keep the structures afloat.

The village forbade motorized boats within their area, so all the locals navigated their village with small rowboats meant to fit two to eight people.

But these boats weren’t the typical rowboats I always imagined. The rower stood facing forward in the back of the boat, using two long, thin oars to push the boat forward and moving the water in tight concentric circles around it.

As we were guided through the village aboard one of the local’s boats, we were able to take a peek at their daily lives. Their houses were small and looked as if they didn’t weigh much.

Their fish farms were attached to their compact houses, made of wood held together in a grid pattern and nets that stretched down into the water between the gaps.

The locals harvested fish and raised them in these farms until they were large enough to eat. Most relied on these fish farms for their livelihood, but they may not be able to for much longer.

The village now holds about 300 people, but it used to be quite larger — so much larger, our guide explained, that the Vietnamese government took note of the pollution caused by the elevated population and were forced to explore other options.

This included moving the locals from their village to the mainland and even demolishing some of the floating town. Those who stayed were educated on the importance of keeping the waters of Ha Long Bay clean.

Because of the size of the village, most of the fish in the area have been depleted in variety and number. If villagers want to catch wild fish, they are forced to go out further into the bay than earlier generations and tend to only catch small fish.

Despite the challenges caused by the water pollution, our guide emphasized that family values were what helped keep the community together. Though the community contained 300 individuals, there were only 17 different families. With the isolation of the village, every person knew the others intimately.

As we finished our tour and returned to our own boat to head back to the marina, I watched as Cua Van faded away into the mist.

I thought about the amount of tourists that would visit them tomorrow, how many fish they would decide to eat tonight, whether there was any local drama.

I felt strangely drawn to the small village. I wanted more than just a peek into their lives. I wanted the full story.