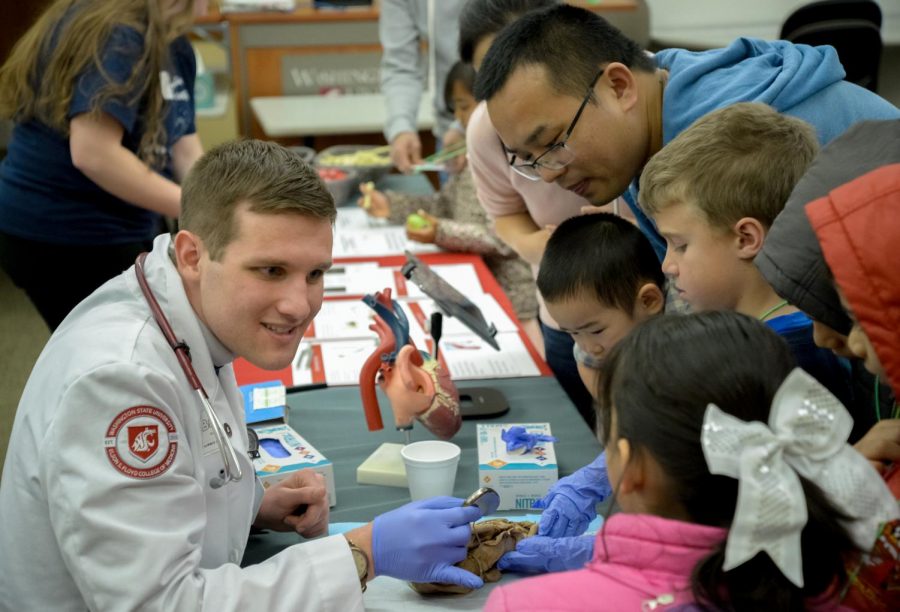 WSU medical student Brent Conrad explains to a group of children how the human heart works at Kids’ Science and Engineering Day.

Wind tunnels, sparkling gemstones and chemical reactions are just some of the many phenomena children explored during the Kids’ Science and Engineering Day, held Saturday in Pullman.

“Exposing children to science at a young age promotes curiosity and inspires options for them in the future,” SWE Secretary Madison Newberry said.

KSED hosted 30 different clubs and organizations on campus that provided projects like making elephant toothpaste and creating structures out of marshmallows and sticks. Newberry, who is also the event coordinator of KSED, said they wanted to provide options for all types of learners so every child could engage.

“It gives them an opportunity to build with their hands,” Newberry said.

Parents stood by while children participated in other activities like building kites or making lava lamps. Tony and Kerensa Allison brought their three children to KSED on a friend’s advice.

“I think it’s important for children to hear about science from multiple people rather than just by their teacher,” Kerensa said.

Tony said events like these are important because children can apply and reinforce what they learn in the classroom.

WSU’s Frank Innovation Zone was one of the many organizations at the event on Saturday. FIZ member Jaydon Bailey said it’s one thing to see or hear about something, but to physically do an activity allows for another level of understanding.

One of the activities FIZ provided was a wind tunnel. The goal was to make an object that, when placed in the tunnel, would be able to escape out the top.

The WSU Biomedical Engineering Society had three stations for children to interact with. One of the activities involved placing small wires that track electrical pulses on the temples to record eye movement. This movement would then show up as a graph on a computer screen creating an electrooculogram, or EOG.

Another club present during the event was the Automotive Enthusiast Club. Members explained how the sound system in a car works by demonstrating how pitch changes vibration.

Faires said the club came to the event to help educate and inspire society’s future builders.

Newberry said this year’s event had a larger turnout than any previous year. She added she enjoys seeing children getting involved in science at such a young age because it makes the idea of being a scientist when they grow up possible.

Correction: Madison Newberry is the secretary of SWE, not the president. She is also the event coordinator of KSED.