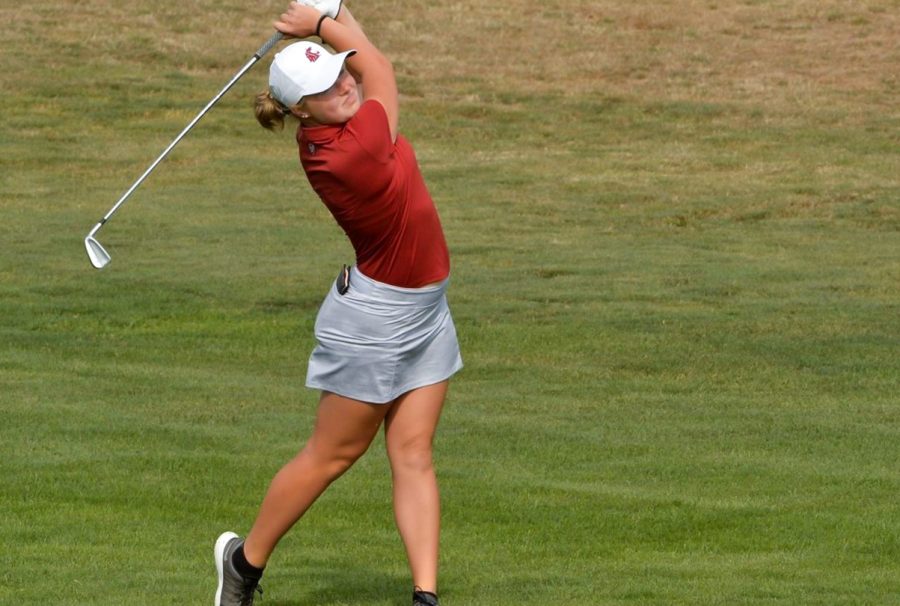 Sophomore Marie Lund-Hansen follows through with her swing during the Ping/ASU Invitational in Tempe, Arizona.

WSU women’s golf improved in every round to finish in tenth place at the PING/ASU Invitational this weekend in Tempe, Arizona, with a total score of 886 (+22).

The Cougars competed against highly-ranked opponents in the tournament, seven of which finished in the top ten. WSU ended the first round of the tournament Friday with a score of 297 (+9).

Senior Alivia Brown had four birdies in the first round and shot two-under to put herself in a tie for sixth place going into Saturday.

Brown and junior Madison Odiorne finished the second round with a tie for 19th, six shots behind the tournament leader. WSU improved yet again on the third and final round Sunday by tallying a 294 (+6).

No. 15 University of Arizona won the invitational by shooting a tournament-low 11-under par Sunday and finishing with a total score of 852 (-12).

Individually, the Cougars were led by Brown and sophomore Marie Lund-Hansen, who both finished in the top 20.

Brown led the team with her fifth-straight top 15 finish. She shot even par for the tournament to finish in 11th place.

Eight spots behind her in 19th place was Lund-Hansen, who tied the team-best round by shooting a 70 (-2) Sunday.

The Cougars will compete next in the Silverado Showdown on April 8 in Silicon Valley, California.