Cougars return to Pullman to duel with Devils 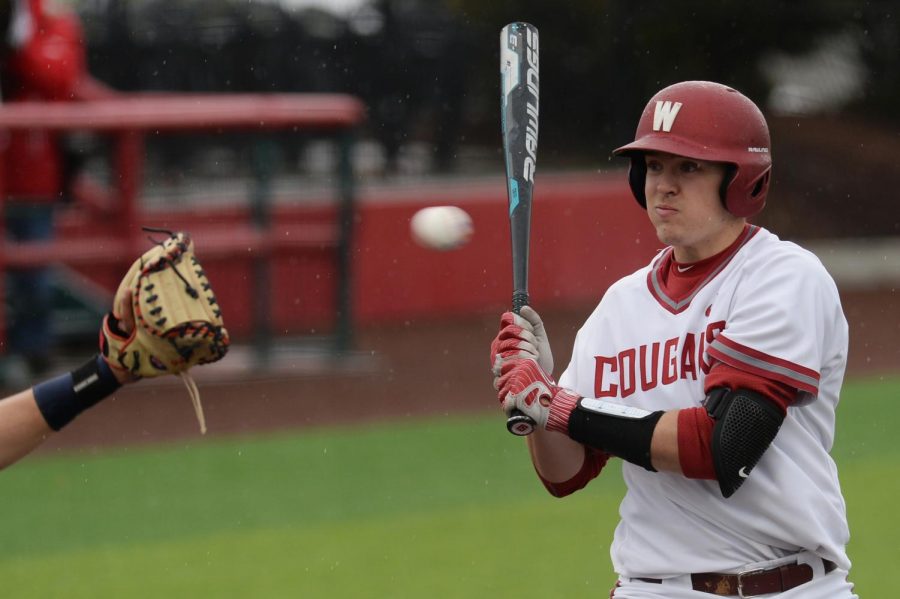 Freshman right-handed pitcher Nick Strange avoids being hit by the ball in a game against Saint Mary’s on March 8 at Bailey-Brayton Field. Strange has allowed 11 hits and six runs in six innings this season.

WSU baseball will host its first conference game of the season Thursday after going 1-6 on a seven-game road trip.

The Cougars (5-14, 1-5) will face Arizona State University (12-12, 4-2), which swept University of Oregon and won one out of three games against University of California, Los Angeles.

Senior infielder Ryan Ramsower said the Cougars need to focus on the little things to come out on top in the upcoming series.

“We just need to eliminate those one or two little mistakes we have each game,” he said, “and capitalize on the other team’s mistakes.”

The Cougars have lost by three or fewer runs in seven of their 14 losses this year. Four of those games were by just one run.

Ramsower said this season has been full of mixed emotions for the Cougars because they have been so close in almost every game that they feel their record should be much better.

It isn’t just one big problem the team needs to fix to win these one-run games, he said. It has been something different each game and the team is working on those issues every day at practice.

“During practice we field routine ground balls, bunt and practice turning the double plays,” Ramsower said. “Even just throwing to the right base or hitting the cutoff man can make a big difference.”

Head Coach Marty Lees said that no one knows what run or pitch may be the defining play in a game.

Just four of the Cougars’ 19 games this season have been in Pullman. Lees said they are excited to play in front of their home crowd and continue to move in the right direction.

When these two teams met last season in Phoenix, the Sun Devils swept the three-game series and won by a combined five runs.

Ramsower said the Sun Devils got after WSU’s pitchers last year, and they will have to play solid defense to limit the scoring chances for Arizona State.

“We have had clutch hitting here or there and good pitching, we just need to come out and play Washington State baseball,” Ramsower said. “We can’t worry about the other team.”

First pitch is scheduled for 6 p.m. Thursday at Bailey-Brayton Field. The game can also be seen live on Pac-12 Networks.