A small group of students protested a senate meeting, saying Savannah Rogers and Tyler Parchem should be impeached 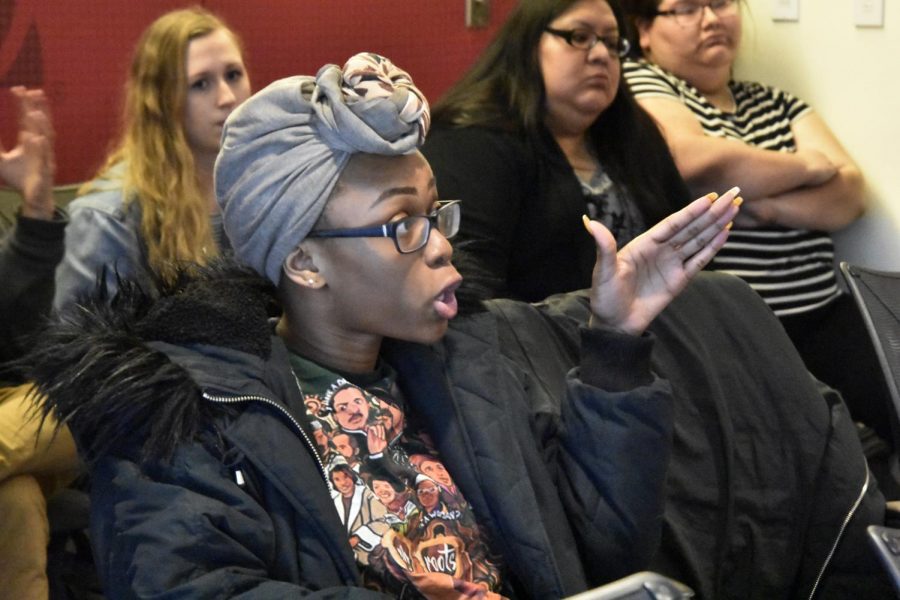 Chijioke Emeka, president of the Black Student Union, while protesting against WSU's rearrangement in multicultural advisers asks Rudy Trejo, an ASWSU advisor, to remove the police officer present Wednesday at an ASWSU senate meeting in the CUB. Before the meeting Trejo asked police to be present because he was worried the protest would get out of hand.

A small group of students staged a sit-in before an ASWSU Senate meeting and demanded Rogers’ and Parchem’s impeachment. Those who participated met at 5 p.m. and waited for the meeting to begin before filing in and standing against the wall to start their protest.

Demonstrators said the accountability measures taken against ASWSU’s future leadership were not enough. The violation in question centered around the actions of Ryan O’Dea, a supporter of Rogers and Parchem who printed about 200 campaign posters using Residence Life resources.

Rogers said he did not hang them up. The money spent was not noted in the campaign expense report, and the Election Board decided last week to fine Rogers and Parchem $165 for misusing resources.

Sophia Rivero, a sophomore at WSU, helped to organize the protest. The people involved had different reasons for being there, but for Rivero it was about accountability.

Jacqui Alarcon, another sophomore, also helped to plan the sit-in.

“I hope… they finally listen to their students,” Alarcon said. “Listening to what we are asking for, listening to our needs and acknowledging us, not just throwing us under the rug.”

Rogers was not able to attend the meeting in person, but she commented on the sit-in.

“We agree student money was stolen, and we agree that’s not okay, at all. We are continually working to try and remedy this situation,” Rogers said. “We support students’ right to protest, and hope the same students who exercise this right, work with us to resolve the situation.”

Harald Hyllseth and Devon Holze, Rogers’ former opponents in the ASWSU election, released a statement on their campaign Facebook page saying they had no involvement in the allegations or actions against Rogers and Parchem.

“We do not have any say in the processes that have occured,” Hyllseth wrote, “and plan to continue acting independently to best serve the communities we are a part of.”

The organizers of the sit-in have also started a petition asking ASWSU to remove Rogers and Parchem from office. As of Wednesday night, the petition has reached 260 of its 2,400 goal.

“We are planning a couple more things behind the scenes, but we are waiting for more things to go public, “Rivero said, “so it’s not just things that we say against what everyone else is saying in ASWSU.”