Club will compete in Montlake after offseason filled with training, recruiting students to join their team 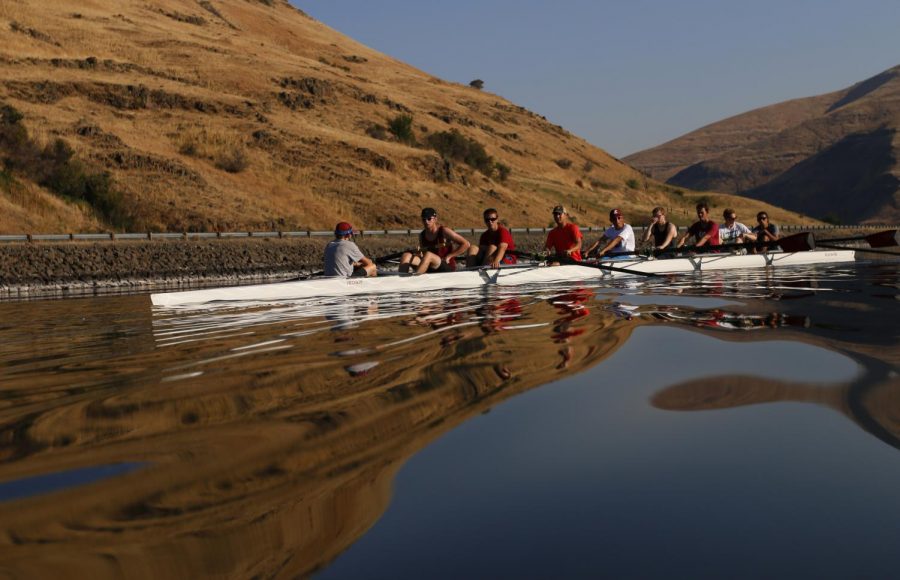 WSU men’s crew varsity members practice with novice rowers to assist in their learning process in September on the Snake River.

The men and women of the Cougar Crew club will travel west to join the WSU rowing team in Seattle to participate in the Husky Open on Saturday.

After a productive offseason and an intersquad day race, the club delegation of rowers at WSU is ready for some action of its own.

First-year Head Coach Peter Brevick has his first varsity eight lineup ready, and said he believes his team is at the right place fundamentally and physically to row with the best.

“A lot of the work in the fall was just getting the basics to the point where we can do the thing we need to do,” Brevick said. “It took a little while, but with where things started at, it’s good to see the progression … We did some fitness assessments at the start of the year, where we had less than a quarter of the team meet the standards, and by January we had all but two or three guys.”

Brevick said they’ve been encouraging people all offseason to join the team.

“One of our big recruiting points in the fall when we are talking to guys on campus,” he said, “is we can look them in the eye and say ‘If you come here and join this team and work really hard, in nine months there is a good chance you will be lining up against Olympians.’ ”

Cougar Crew’s first varsity eight will face Gonzaga University, University of Washington and University of Puget Sound for their first race of the morning. The field of competition is familiar for the Cougars, as WSU saw Gonzaga and UW this fall in 5000-meter races.

With the Husky Open being the first 2000-meter race — let alone the atmosphere of the Montlake Cut on race day — for some of the Cougars, prerace jitters are hard to ignore, Brevick said.

“I am sure they are feeling some [anxiety], I think everyone does at some point,” Brevick said. “You do so much work to be ready for it that there is a lot of investment on their end and to each race we do.”

The first varsity eight is scheduled to hit the water at 10:05 a.m. Saturday.