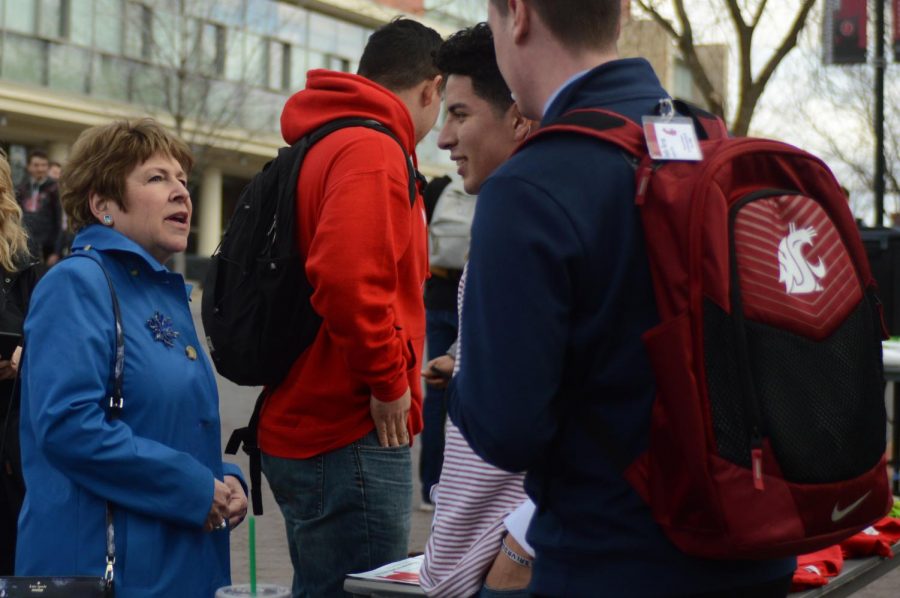 In a congressional race that has gained national attention, Democratic candidate Lisa Brown has tried to separate herself from her opponent by highlighting efforts to connect with local voters.

Brown, who was WSU Spokane’s chancellor before entering the race, spoke mostly on gun control, government-funded healthcare and campaign financing.

At a Foley Institute-hosted talk Thursday, she expressed dissatisfaction with current gun violence levels, but stopped short of calling for weapons bans, as other Democrats have.

“I don’t think we need to choose between the Second Amendment and reducing gun violence,” Brown said.

However, she said she supported the idea of preventing people with histories of domestic violence and people on no-fly lists from buying firearms.

“It’s pretty clear that most Americans and most gun owners don’t agree with loopholes in the system that allow guns to get into hands of people that shouldn’t have them,” Brown said.

After her talk, fourth-year physics student Chad Jerald said Brown’s support of some gun control measures made him feel “uneasy.” Jerald described himself as a gun rights advocate who opposes banning high-capacity magazines and assault rifles, which gun control supporters and certain lawmakers have proposed.

Jerald, who leans conservative, said he has not decided whom to vote for and would like to wait to hear from current Rep. Cathy McMorris Rodgers before he makes a decision.

Brown said she decided to run after watching Congress craft the 2017 American Health Care Act, which struggled through the political process but ultimately passed almost entirely along party lines. She has voiced support for single-payer healthcare, a publicly funded system that would cover basic care for everyone. Brown called affordable healthcare the “issue of our time” at a November campaign event.

“The cost of prescription drugs is out of control,” she said.

Cassidy Cunningham, a freshman nursing student, said she supports Brown largely because of her stance on healthcare. Cunningham, who is from Spokane, said McMorris Rodgers did not have enough presence in the district to earn her support.

“I don’t think I’ve ever seen [McMorris Rodgers] in person,” she said.

“Why is Congress not taking on the cost of prescription drugs?” she said. “I think the priorities get skewed by the influence of money in politics.”

“I hope people reject that kind of politics,” Brown said.

She said she admired Conor Lamb, who won a congressional race and claimed he did not accept any corporate PAC money. Brown said people should “stay tuned” over the next week for news on her campaign accepting donations from PACs, but did not specify.

“I will support legislation to overturn Citizens United,” she said, referring to a Supreme Court case that prohibited the government from limiting campaign contributions. “[Super PAC money] has turned from a river to a flood with the Citizens United decision.”