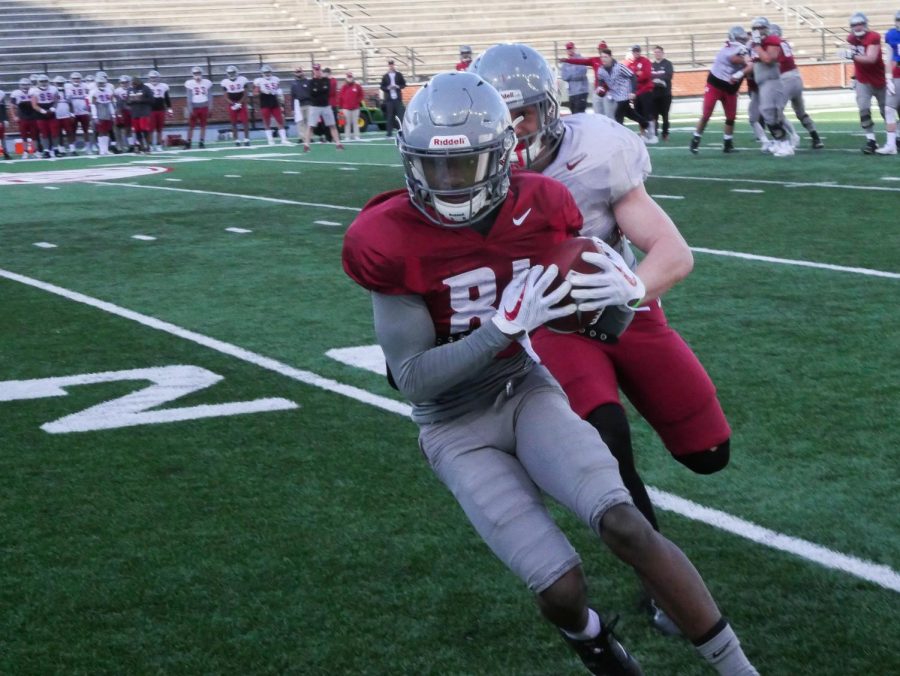 With about a week’s worth of spring practices under WSU football’s belt, coaches have thrown on the lab coats to experiment with their first-team groups.

This week, we take a peek at the two offensive position groups who have new faces coaching them: the wide receivers and offensive lineman.

For the offensive line, Head Coach Mike Leach chose Mason Miller, one of his former players and another student of the Air Raid. Miller is one of those no-nonsense coaches and seems eager to squash the stigma that the offensive line is soft.

For the inside receivers, WSU has a reliable group, and it starts with senior Kyle Sweet. There isn’t a shortage of slot receivers behind Sweet, either. Redshirt sophomore Renard Bell and sophomore Jamire Calvin, who can be seen at both the inside and outside position, are coming off impressive freshman years and are looking sharp early on.

The outside receivers have seen the most turnover from 2017 due to the departure of starting outside receivers Tavares Martin Jr. and Isaiah Johnson-Mack. The two reeled in 130 receptions between themselves, and Spurrier Jr. will need to figure out how to fill that void.

Cougar fans have been chomping at the bit for an opportunity to see one of the staples of the 2018 recruiting class, true freshman wide receiver Rodrick Fisher. He certainly looks like a receiver who warrants a four-star ranking, but his skills need to be refined and, more importantly, he needs to learn Leach’s offense.

Several times Fisher’s teammates have gotten on the young receiver for not knowing an assignment. However, Fisher seems to be eager to learn — he doesn’t stray far from Spurrier Jr. at practice.

Sophomore Davontavean Martin and junior Dezmon Patmon are two of the leading candidates to take the starting outside receiver spots. Both receivers have taller frames that cater to the outside position.

Martin is 6 feet 3 inches with eye-popping athleticism, and Patmon, standing at 6 feet 4 inches, has the build of a tight end and will presumably cause opposing teams matchup issues in the redzone.

Verdict: Expect Martin, Patmon and Calvin to claim the openings at the outside receiver spots by committee, but per usual, there will be anywhere from eight to 10 receivers that will see the field, so the starting title can be taken with a grain of salt.

This week was the first time Cougar fans got to hear from the fiery first-year offensive line coach Mason Miller. His first task at WSU will be to find replacements for three of the five starting spots. He has tried to instill his simple rules that he believes will lead to success.

“I’m a Marine’s kid, so I don’t let the grass grow beneath my feet very much,” Miller said. “We have simple rules: One of them is hustle everywhere you go. Give good effort, do it with a smile on your face and do it as fast as you can and good things will happen to you.”

While this is subject to change, expect at least three of these five names to be on the starting depth chart in the fall.

Mauigoa, who started for the Cougars last year, is being contested for his job by redshirt freshman Brian Greene. Miller mentioned Greene as a player who has followed his rules and is beginning to see the success come to fruition.

Depending on how the offensive line shakes out, Osur-Myers could potentially take the center spot as well. Osur-Myers is naturally a guard but has demonstrated his versatility when he was the sixth man for the Cougars’ offensive line last season. He appeared at both guard positions as well as center in 2017.

Among the linemen with no playing experience yet, Lucas has made himself a strong candidate to replace Cole Madison at right tackle.

His 6-foot-6-inch stature is prototypical for an NFL lineman, and his athleticism for his size is reminiscent of his teammate Dillard. The one drawback for Lucas is that he is not yet technically sound to be a consistent starting right tackle in the Pac-12.

Now a week into spring practice, Miller has begun experimenting with his first-team line. Redshirt senior Robert Valencia, who typically lines up with the second-team at right tackle, has progressively gotten more time with the first-team. He can play right guard or right tackle but looks more natural in the tackle position.

Lucas looks more like the best option for the right tackle position with each day of practice, so if Valencia wants the best opportunity at seeing the field, securing the right guard spot might be his best bet.

Verdict: The only lineman that can be 100 percent sure he will start this season is Dillard.