Cougars do battle with Bulldogs 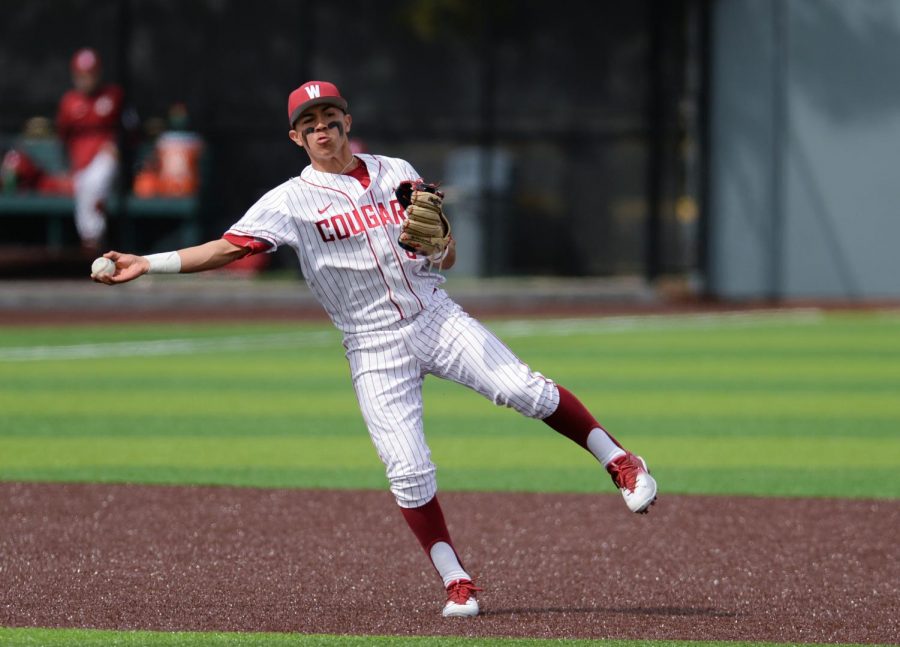 Junior infielder Andres Alvarez fields the ball and throws to first base hoping to get an Arizona State runner out Saturday at Bailey-Brayton Field. Alvarez has started 22 games this season, batting in five runners and racking up 19 hits.

WSU baseball will take on Gonzaga University (13-12) on Tuesday. The team is coming off two walk-off wins and a blowout loss to Arizona State University this weekend.

Head Coach Marty Lees said the Cougars’ (7-15) ability to battle back in games has impressed him.

“These kids have been pretty resilient for a long time,” Lees said. “They stay together, they trust each other and they believe in each other.”

Prior to Saturday’s 7-0 loss to the Sun Devils, six of the Cougars’ last eight games were decided by one run.

Friday’s victory featured a promising performance from senior left-handed pitcher Scotty Sunitsch. He worked seven and two-thirds of an inning, allowing three runs on seven hits while striking out seven.

“He made a big jump,” Lees said. “It’s good for him and it’s good for us. We expect that from him as a senior. He’s been in these battles going on his fourth year.”

Tuesday’s game against the Bulldogs (13-12) is the last of a four-game home stand before they hit the road for a three-game series with University of Oregon in Eugene.

The Cougars have played 15 away games this season compared to just seven in Pullman, and four of their seven victories have come at home.

Lees said the team will continue to improve as their roles become more defined and players know when it’s their time to step up.

Gonzaga lost to Stanford University 4-3 Monday in Palo Alto and has dropped five of its last seven games.

First pitch is scheduled for 5 p.m. Friday at Bailey-Brayton Field. The game can also be seen live on Pac-12 Networks.