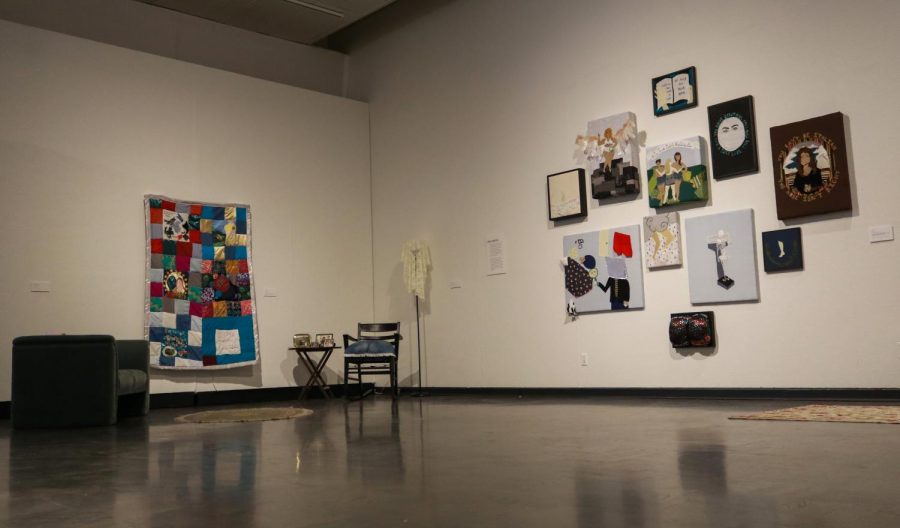 Part of Anna Carpenter's art exhibit stands on display in the Museum of Art as part of the Master of Fine Arts Thesis Exhibition.

The Master of Fine Arts Exhibition opened yesterday, displaying pieces some students have been working on for years.

The new exhibition in the Jordan Schnitzer Museum of Art, which will be open until May 5, features the work of seven master of fine arts graduate candidates.

Jared Boorn, whose art is on display, was inspired by modern technology, but that came with an interesting set of challenges. His fusion of art, people and machines took about a year to complete. The installation features a sharpie attached to a mechanical chassis that uses a counterweight to move the sharpie across a large sheet of paper and create an independent drawing.

“I do a lot of autonomous, robotic interactive art,” Boorn said, “so it was making sure that my code ran smoothly and I had all of my files prepped for the exhibition.”

Anna Carpenter, another graduate student with art in the exhibition, values the reactions to her art. Carpenter’s art features many unusual fabrics, such as thrifted underwear, which she combined with embroidery to make statements about the female body.

One such example is her recreation of the Mona Lisa, without any of the facial features except for the nose. A sentenced embroidered around it reads, “You can’t be Italian, the nose isn’t right.”

“I really like the reaction I’m getting from the people who encounter my space,” Carpenter said, “whether they want to touch something or laugh at something, because I incorporate humor in a lot of my pieces.”

Fine arts graduate student Morganne Radziewicz’s large, semi-sculptural piece posed a unique challenge due to its size. Her installation comes in two pieces, which hooked together with a couple books underneath to prop it up. It featured a large wave, crashing and cascading across the piece.

“Because of its weight I hadn’t actually seen it put together,” Radziewicz said. “Just trying to get that to balance on its own … sort of required some creative problem solving.”

Radziewicz used her art to make a statement as well. She said her piece was meant to portray anxiety and mental health.

“Allowing myself the space to take care of myself and respond to my friends, family and those around me,” she said. “That should be more of a staple of the world we live in instead of just work and ignoring how we are feeling.”

The MFA exhibition is a chance for the public to see what the graduate students have been working on, but it is also a chance for them to gather and view each other’s art.

“It was really refreshing to see all of our work together in a space, because we’ve worked so closely together as a cohort for these past two years,” Radziewicz said. “We haven’t really seen everybody’s work in the same space, so that’s really nice.”