Two generations of nurses come together for Mom’s Weekend 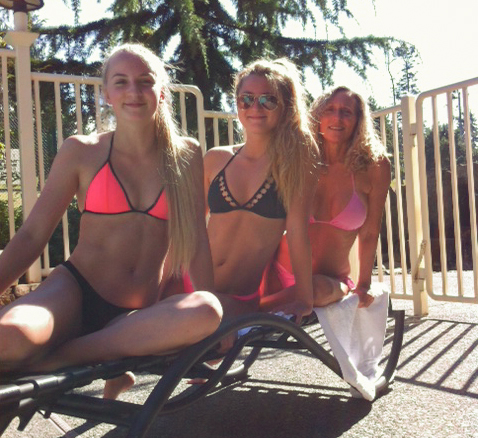 Debra Carr, right, hangs out with her daughter, Bailey, middle. They often spend time at lakesides or pools.

As Bailey Johnson was starting college, her mother, a nurse, discouraged her from following in her footsteps.

“I actually tried to talk Bailey out of going into nursing,” Debra Carr, her mother, said.

Carr, 59, said a career spent working long hours with little pay has left her a little jaded, but she loved it nonetheless.

Now, as Johnson is about to transition from WSU Pullman to nursing school, her mother said she is going to be an excellent nurse.

Johnson, a third-year WSU student, said she is excited to spend time with her mom and her sister this weekend. She is looking forward to showing her mom around campus because other Mom’s Weekends have not worked out for them.

She described Carr as empathetic, but strong. Johnson thinks this comes from working as a nurse, and she is inspired by her mother’s career choice.

“From day one,” she said, “I’ve always wanted to be a nurse because of her.”

A WSU nursing student herself in the 1980s, Carr said she has not been back to Pullman in 30 years. She said she is excited to return for Mom’s Weekend to spend time with her daughter, walk down memory lane and cut loose.

They also plan on working out together. Carr was a weightlifter during her time at WSU and still likes to stay active, her newest fitness endeavor being pole fit.

“I love a challenge,” she said.

Johnson, who was a gymnast for 14 years, has also taken to weightlifting, Carr said, and the two work out together when she is home for breaks.

They also enjoy shopping, and Carr said they have similar tastes.

“Interestingly,” she said, “a lot of things that I buy seem to disappear when she comes home.”

Johnson agreed they love shopping together and said she would not be surprised if they end up taking a trip to Spokane over the weekend.

Carr said she hopes other mothers visiting for the weekend will connect with their daughters and the people they have become.

“I can’t imagine any young lady going off to college, away from home, not changing,” she said.

Johnson’s advice for other daughters spending the weekend with their moms is to appreciate the time they have together.