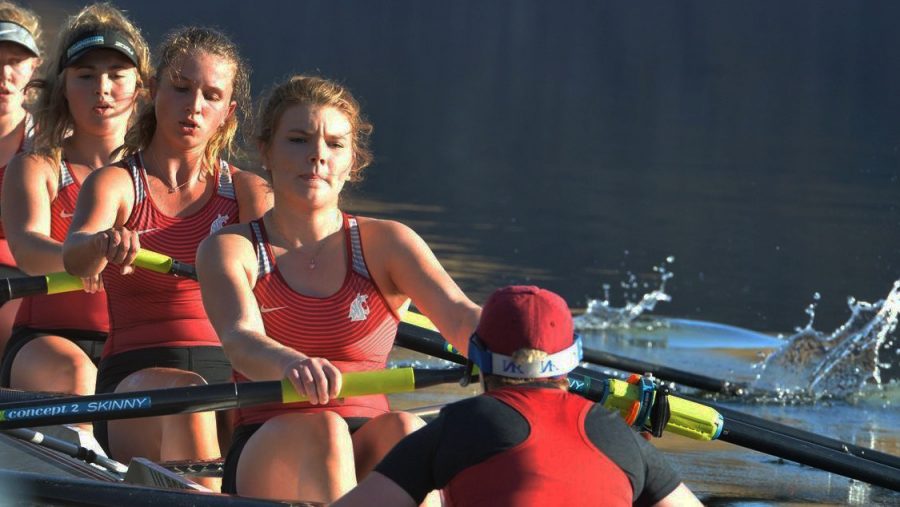 WSU rowing competes in a race earlier this season. Cougars are coming off sweep at hands of No. 1 UW.

For the first and last home regatta of the season, WSU rowing will host Oregon State University in a dual-meet Friday.

After being swept by University of Washington last weekend, the Cougars dropped two spots to No. 15 in the most recent U.S. Rowing poll. But the Cougars are hopping right back into the boat with more Pac-12 competition as they will chase for their fourth consecutive Winchell Cup.

Head Coach Jane LaRiviere said the Cougars are looking forward to dipping their oars in the water at home.

“We’ve had two weekends in a row of travel, so it will be nice to stay here,” she said. “It’s also the seniors’ last home race and so there’s going to be senior day festivities with the parents and the seniors. It’s a fun event.”

The race, which was scheduled for Saturday morning but was moved to Friday due to expected inclement weather, will have five heats. The first varsity four will begin at 5 p.m., followed by the second varsity eight at 5:15 p.m.

The first varsity eight will race for the Crawford Plate at 5:30 p.m. The regatta concludes at 6 p.m. with the third varsity eight and novice eight crews racing.

The Winchell Cup and the Crawford Plate are both named in honor of former WSU rowing coaches.

The Winchell Cup, which is awarded to the winner of the regatta, is named after Jodi Winchell who spent 11 years as WSU rowing’s novice coach.

The Crawford Plate is named after WSU rowing’s first-ever Head Coach Tammy Crawford, who was responsible for bringing two national championships to WSU, one at the varsity level and another at the novice level.

“I think Tammy started in 1990 and really led the charge in a lot of Title IX stuff, and equity in rowing,” LaRiviere said. “And then her longtime assistant Jodi Winchell was a very successful novice coach here, so the cups are named in honor of the women who came before us.”

Last year when these two sides met in Corvallis, the Cougars pulled off a sweep against the Beavers. WSU’s first varsity eight was able to beat the Beavers by a little over seven seconds to claim its third consecutive Crawford Plate.

The Cougars will go for their fourth starting at 5 p.m. Friday at Wawawai Landing.