Always at the finish line, there for advice 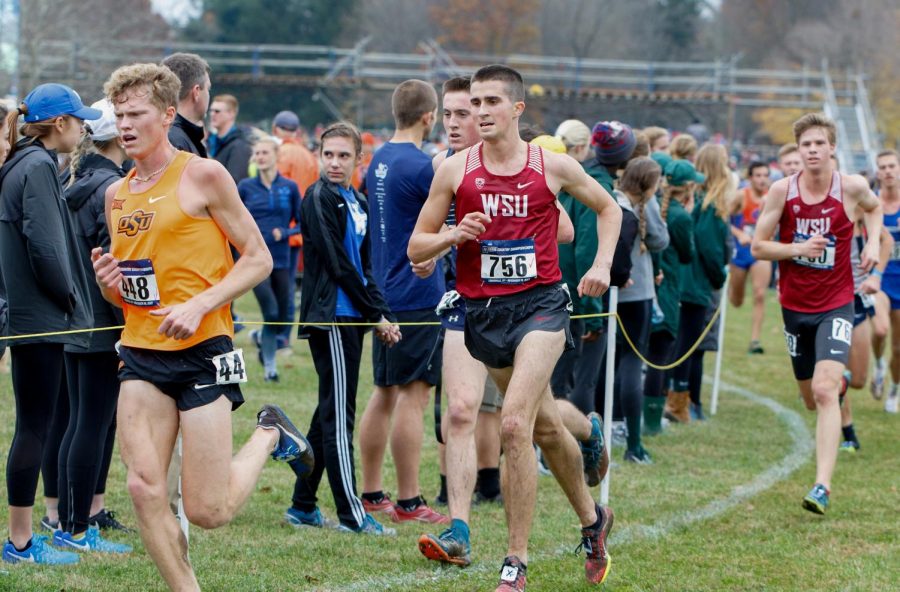 It was the end of March in Northern California at the Stanford Invitational, and the weather was perfect for a day of track and field.

Redshirt sophomore Paul Ryan crossed the finish line of the men’s 1,500-meter run in second place. Out of breath, he looked to the crowd to see his mother Allison and father Mark cheering him on.

“It means a lot,” Paul said. “She really likes coming and watching me race.”

Paul has run competitively since ninth grade, and to him there’s nothing more familiar than seeing his mother root for him.

From his second year of high school until he graduated from Logos School in Moscow, his mom was his track and field coach.

“During high school it was challenging sometimes,” Paul said, “but now looking back it was really cool.”

Allison said it is difficult to be only a supporter of her son, and not a coach. She said she still slips up from time to time.

“Now I’m just his friend and his mom and I have to keep my mouth shut,” she said. “That can be hard, but I’m doing pretty good.”

Allison is no stranger to track. She ran at University of Idaho in the 1980s, held the school record in the women’s 800-meter run for nearly 20 years and is currently a teacher in Moscow.

She said she realized Paul had a future in track when he was in fifth grade and she had her students run a mile.

“I was substituting in P.E. and we took all the kids out,” Allison said. “He ran it in about five and a half minutes and it was this little tiny guy with no training, and he was way ahead of the other kids.”

Paul said he has always loved the feeling of getting a good run in.

“There is this euphoria you get from a hard training session or going for a run on a nice day,” Paul said. “After a good race you get this [feeling] you left it all out there and you can relax now.”

Under his mother’s wing, he transformed from a child with promise into a perennial Idaho State Champion and a collegiate athlete.

Allison said that as a coach, she has never seen an athlete more self-motivated than Paul.

“If I’m going to get up early in the morning in the dark and run, I’ve got to have a partner waiting for me,” she said. “He doesn’t need other people. That’s such a great quality to have in a long-distance runner, to be so self-motivated or disciplined, because it really is kind of a lonely sport.”

This drive was evident when Paul won the men’s 3,200-meter run at state championships during his sophomore year in high school — on a broken foot.

“His last laps he couldn’t push off his toes because [he] was about to break his navicular bone,” Allison said. “That was a time when he was really brave.”

After a brilliant high school track career, a tough decision loomed for Paul: Where would he go to college? In the end, he chose WSU because of how close it was to where he grew up.

“I wanted to compete at a higher level,” Paul said. “The Pac-12 offers that.”

Allison said Paul struggled to acclimate to the competition in the Pac-12 at first, but has adjusted over time.

“He has lots of room for improvement, but I think success breeds success and he had that just last weekend,” Allison said. “I think he is feeling a bit more confident.”

No matter what, Allison said she is proud of Ryan.

“Not only is he a good athlete, he’s a fine young man,” Allison said. “He’s kind to his brothers and sisters, and honest and hardworking and a great student … You don’t always get that.”