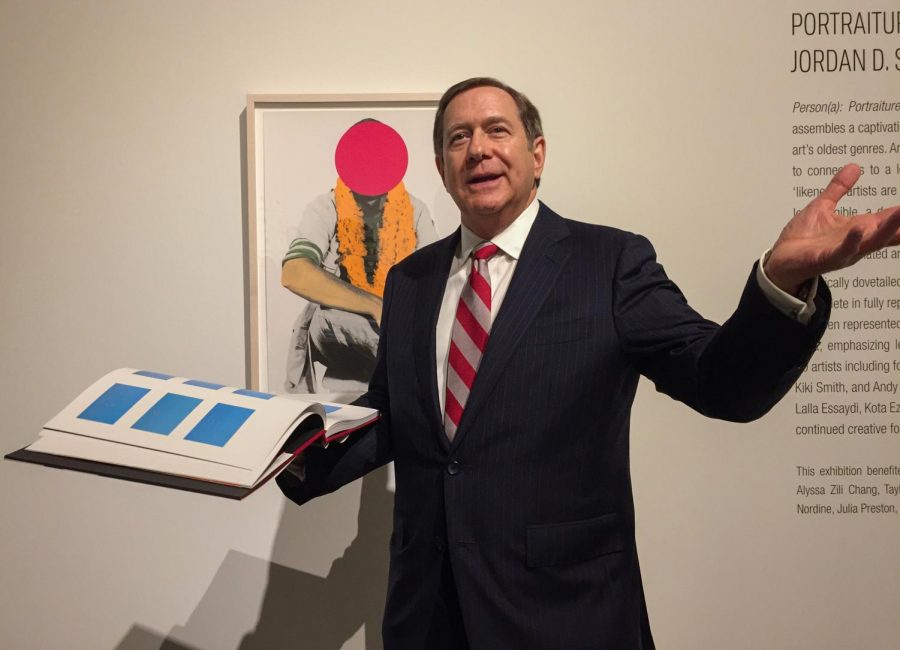 Jordan Schnitzer, a Portland art collector who donated $5 million to the construction of WSU’s new art museum, speaks at the opening ceremony for the building, which bears his name.

A bowl full of pins sat on the reception desk with text printed on them reading, “the earth without art is just eh.”

Attendees made their way to the snack bar and grabbed mini red velvet cupcakes topped with white frosting and crimson and gray sprinkles. After WSU President Kirk Schulz cut a giant burgundy ribbon, people rushed through the entryway of the Jordan Schnitzer Museum of Art.

Also known as the Crimson Cube, the museum is encased in shiny crimson panels, which reflect the building’s surroundings and anyone who looks at it.

Jim Olson, the building’s chief designer, said the reflective nature of the Crimson Cube is to make a relatively small building appear bigger in spirit. He said it also allows passersby to see themselves in the reflection.

“Through seeing themselves in the building,” Olson said, “they become part of the art in a way.”

Schnitzer, the Portland art collector and donor of $5 million for whom the museum is named, spoke about featured artist John Baldessari.

There was an instance when Baldessari was offered the opportunity to teach art lessons at a juvenile detention school, Schnitzer said. The boys asked Baldessari if he could get them into the gym at night to play basketball, he said. Baldessari decided to make a deal with them.

“[Baldessari] said, ‘I’ll make you a deal — you get your butts in and come to my art class, I’ll let you in tonight to the gym,’” Schnitzer said. “They did show up the next day for his art class, and suddenly they paid attention to him and began to realize that he could change the world [by] being an artist.”

Baldessari, whose work is on display in the Harmon/Wright gallery, gathers appropriated images, or any images in the public domain such as newspapers and Hollywood stills, and manipulates them, Schnitzer said. Baldessari showcased this style in his piece, titled “Hero.”

He placed a neon pink circle around the head of a man, who is sitting with his right leg crossed on top his left. His right arm is resting near his right knee, and his left arm is gripping near the ankle of his right leg. The subject is wearing a white button-up with a green and white striped top underneath. A handful of what appears to be orange leis hangs around his neck.

The viewer is unable to determine the emotion of the subject — therefore, it is up to the viewer to suggest a meaning unique to them, Schnitzer said.

“By putting this circle in front,” Schnitzer said, “it drives us crazy because he’s screwing with our normal mechanisms.”

Anna-Maria Shannon, interim director of Jordan Schnitzer Museum of Art, said it is important to lead exhibitions that open up conversations. The giant blue heart that rests in the middle of campus is an example of a conversation starter, she said.

“We haven’t had that on this campus for 20 years,” Shannon said. “Art is a catalyst — it moves us forward.”