For students to be challenged at WSU, don’t censor hate speech, encourage debate across campus 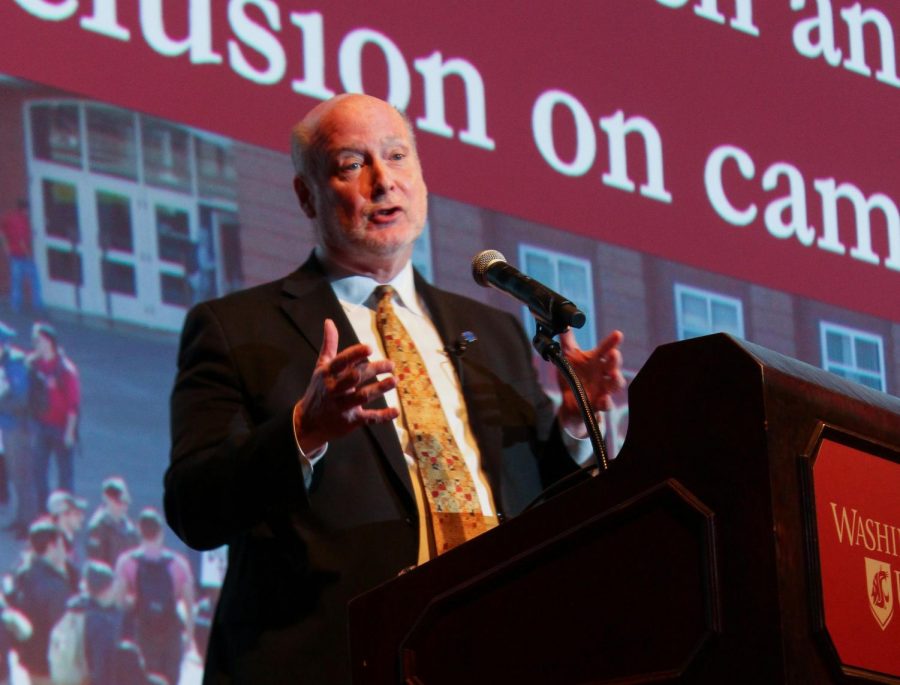 Howard Gillman, chancellor of the University of California, Irvine, discusses how free speech is important to freedom of thought.

Hate speech on campus is an issue that should be solved with more speech, not more restrictions. Suppressing unpopular, critical or hateful views is directly opposed to the mission of WSU as an institution that advances knowledge and prepares students for professional life beyond a college campus.

WSU, like many other universities, has a free speech policy that imposes some reasonable limitations on the length and location of free speech activities. But none of them have to do with altering or suppressing the content of those events.

“The constitutional requirement is that these types of time, place and manner restrictions can’t aim at the content of what’s being expressed,” said Cornell Clayton, director of the Foley Institute. “They can’t aim at trying to censor the expression of ideas, even if we find them offensive ideas or hurtful or even hateful ideas.”

On March 29, the Foley Institute hosted Howard Gillman, a chancellor from the University of California, Irvine, to speak on the subject of hate speech and why it should be protected on campus.

“I invited him because I knew [hate speech] has been a hot topic on campuses around the country, including here at WSU because of some of the recent controversy,” Clayton said. “I thought it was a perfect opportunity.”

During his talk, Gillman explored how defining hate speech is impossible because everyone considers different ideas hateful. He went on to say that every hate speech code at a university that censored ideas was eventually deemed unconstitutional.

“Universities exist to provide the conditions for hard thought and difficult debate so that new knowledge can be generated and individuals can develop the capacity for independent judgment,” Gillman said. “This cannot happen if universities attempt to shield people from ideas and opinions they might find unwelcome.”

The chance to convince someone with hateful views that their perspective is wrong is taken away by limiting what ideas are allowed to be discussed. While it seems harsh, emotional security must come second to free speech if students hope to be challenged.

It is also important for proponents of stricter speech regulations to recognize that if the power to suppress ideas were ever afforded to an authority, their own ideas might eventually be restricted, not just the hateful rhetoric they are seeking to eliminate.

That being said, however, there exists many groups that have the means to suppress speech without needing explicit legal authority to do so. Police often use force to silence protesters even if they are in compliance with the law. This was the case in 2016 during the Dakota Access Pipeline protests, when security used attack dogs and police used water cannons on protesters.

Speaking out against the status quo can also result in ostracizing people from meaningful discussion because they hold uncommon views. Speaking against the military, challenging racial biases and contesting patriotism can all lead to people being excluded from debates and discussions.

These kind of informal violations are just as bad as any law that attempts to limit speech, and it happens on both sides of the political spectrum. Since no law can prevent social censorship, it falls to citizens to change the conversation on their own.

“We sometimes forget that many of the views we take for granted were once considered harmful and deserving of censorship and punishment,” Gillman said.

Gillman points out that no American law has ever successfully defined hate speech. Terms like libel, obscenity and incitement of violence have established legal definitions that can be applied to punish someone for how they articulate their viewpoints, rather than the views themselves.

Approaching speech in this manner is more effective than trying to brand all ideas of one type as criminal. It is incredibly dangerous to suppress ideas of any kind. It restricts education and prevents people of the chance to have meaningful discussion.

As former Supreme Court Associate Justice Louis Brandeis said, “If there be time to expose, through discussion, the falsehood and fallacies, to avert the evil by the processes of education, the remedy to be applied is more speech, not enforced silence.”

Silencing evil does not banish it from the world. Education, discussion and a willingness to speak even when people are being told to stay silent are the only sure ways to resist the decay of democracy.