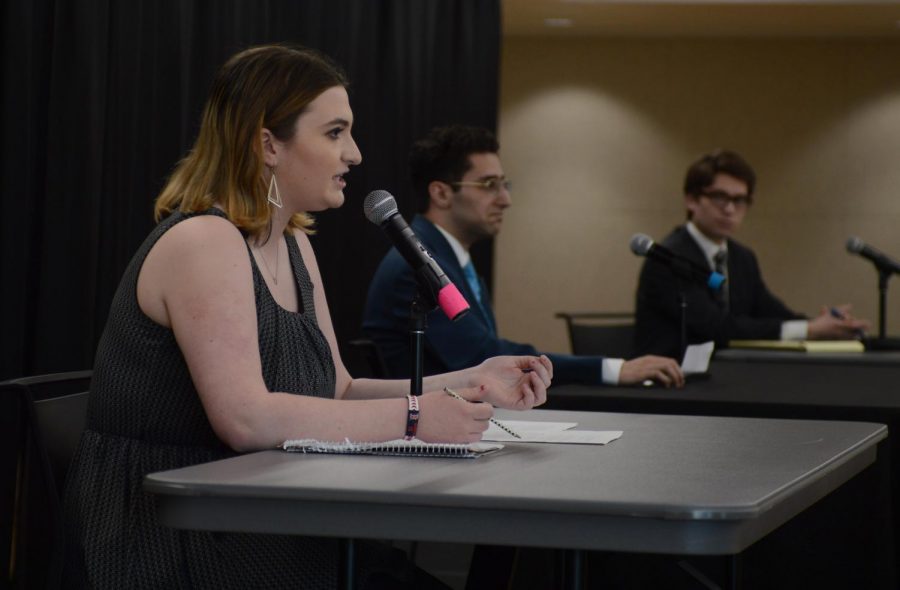 The debate, between Young Americans for Liberty, the College Republicans and the Young Democrats, was hosted by the ASWSU  Issues and Forums Committee and was separated into four sections, with one member of each club on stage per issue.

During the debate over equal pay, Young Americans for Liberty panelist Noah White and College Republicans panelist Amir Rezamand said that when looking at the wage gap, it’s important to look at the different jobs women and men tend to work, as well as maternity leave and women’s preference for jobs with flexible hours.

They said the issue is more complicated than just raw numbers. Rezamand argued that when those factors are taken into account, the wage gap is much smaller than it initially appears.

“Obviously it’s going to look different when you have different amounts of people for different ratios of genders in completely different fields,” he said.
Young Democrats panelist Hannah Martian, the sole female debater, countered their claims, saying that even adjusting for those factors, a calculable wage gap still exists.

One panel addressed the role of government in America, with Young Democrats Drew Cannon opening the debate.

“For the most part,” Cannon said, “we think the government has the role of complementing the private sector.”

Specific areas he believes government could or currently does manage better than the private sector include military, policing, maintenance of order in society, disaster relief and health care.

Blaine Ross, College Republican panelist and Evergreen columnist, focused on the constitutional limits of governments and what freedom means for Republicans, emphasizing rights and security. He also addressed an earlier claim from Cannon that conservatives support no government, saying government was necessary to preserve the sanctity of a state.

Young Americans for Liberty panelist Nicolas Argon also discussed the importance of constitutional limits on government, as well as its role in preserving the rights of citizens.

“Think of the government as a barrier,” Argon said. “When there’s a domestic threat, whether an individual or a corporation is violating your rights, the government is there to step in and make sure that doesn’t happen again.”

The panel also argued over the government’s role in welfare, with Cannon saying the private charity sector could never cover the needs welfare programs currently fill.

Argon said the government should eliminate bureaucratic redundancies, and Ross said it should reduce welfare spending, using anecdotes from people he knew who allegedly abuse the welfare system.

During an education panel, David McLerran, president of Young Americans for Liberty, emphasized school choice and trade schools. He also criticized what he saw as an inefficient K-12 education system that funneled students into four-year colleges and didn’t properly prepare them for the workforce.

“We’re seeing the results from a watered-down education system,” he said, “where we are flooding people into our universities and we’re actually seeing job shortages in areas like trades.”

“We aren’t giving everyone the same freedom they deserve,” Berkompas said. “What we must do is offer K-12 education to every American by supporting them with the same resources that every other American has.”

College Republicans panelist Stuart Walsh emphasized trade school and school choice, saying schools should compete for students, and parents should be able to choose which school their children attend.

“In a system where schools aren’t forced to compete, everybody loses to a certain degree,” Walsh said. “Why not incentivize schools to be better and have more winners?”

The final panel discussed criminal justice in the U.S., with participants disagreeing on policing and mass incarceration but agreeing that mandatory sentencing was an issue.

Young Americans for Liberty panelist River Maketa and Young Democrats panelist Julian Dow emphasized accountability in law enforcement, with Maketa focusing on using body cameras as a solution. Dow discussed racial discrimination in policing and the importance of training for law enforcement outside of self-defense, to engage with minority communities.

College Republicans panelist Chad Jerald Jr. said the media often blows police shootings out of proportion before all the facts are in, and often the situations are more complicated than they first appear.

Initially, he said more whites are shot by police than blacks, but after Dow brought up that there are more white people in the U.S. and statistically minorities are arrested or killed more often, Jerald Jr. said police do make mistakes.

All three panelists agreed mandatory sentences increase the amount of time many Americans spend in prison, and they thought that often this takes discretion out of judges’ hands.

Jerald Jr., digressed from the other panelists, saying he still thought in moderation, mandatory sentences can make the court process more efficient in some cases.

This story has been updated from its original version.