Students surprised by rain in spring

Although weather is consistent with years past, people in shock 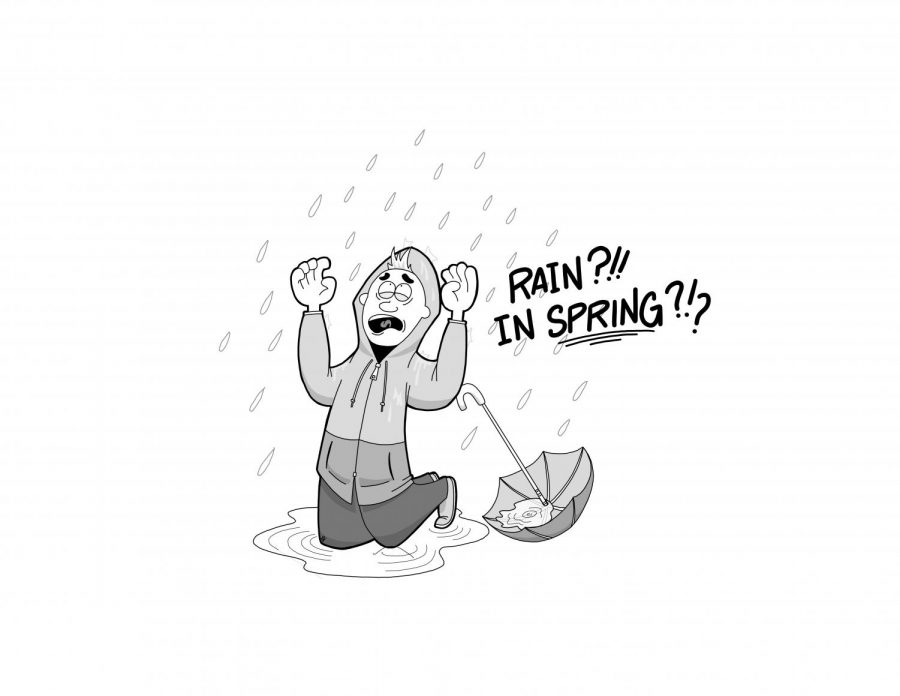 Weather experts in Pullman were thrown for a loop this week when temperatures, as well as precipitation, stayed in the average range for this time of year. Students, faculty and community members alike were baffled by weather, which was completely consistent with previous years.

Pullman meteorologist Gavin McGraw expressed concern over the moderate to cold temperatures that have been occurring throughout March and April. He said he expected warmer weather and more sun than Pullman has been getting.

“I’ve never seen anything like it,” McGraw said. “Rain and a couple 40 degree days? In spring? It’s preposterous, especially here in the northern United States.”

McGraw said he isn’t sure what to expect of Pullman’s weather in the coming weeks. However, he said he is excited to see these cold temperatures because of the possible advantages on the world stage.

“If it keeps up like this, the glaciers and ice caps may not be in danger anymore,” he said. “Global warming could very well have been a myth all along.”

Students on campus were also shocked and dismayed by the rain and clouds this spring. Though U.S. Climate Data shows that current temperatures and precipitation are on par with averages for at least the past five years, no student seems to recognize any similarities between this year and those past.

“I can’t believe it, all this rain in spring in the Pacific Northwest,” senior Ulrich Neiden said. “It’s never been like this. It’s always nice sunbathing weather by this time.”

Neiden said he remembers April being sunny and warm last year and claimed he was able to wear his Chacos as early as February.

Freshman Tanya Crest said she recalls talking on the phone last spring with her sister Kayla, another WSU student. All Kayla did, Crest said, was complain about all the wind and ice.

“I guess she must have been lying or something, though,” Crest said. “Nobody on campus seems to remember it that way. Everyone is so upset and confused by the weather right now, there’s no way it was cold or rainy last year.”