Teammates stick together on, off tennis court

Sophomores met each other while playing tennis in home country 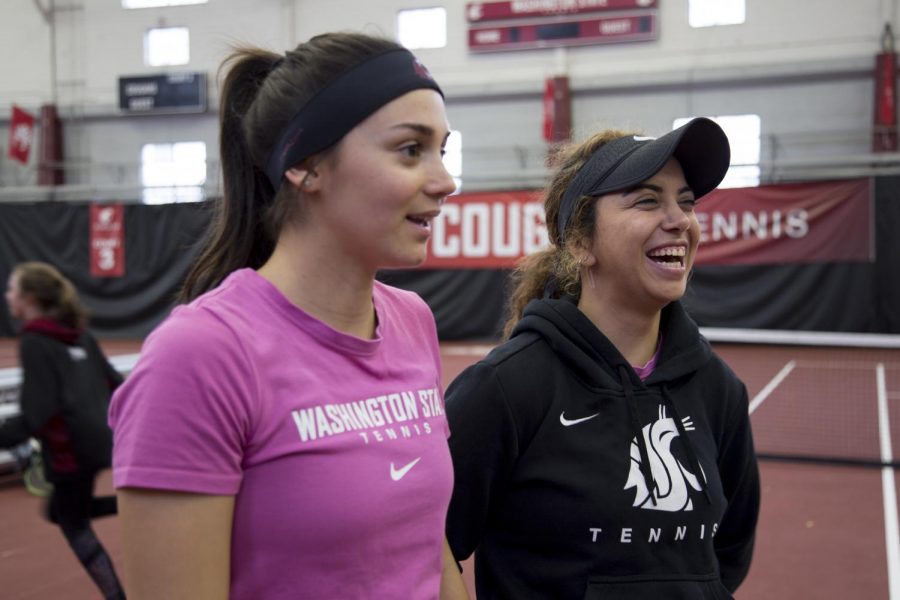 Sophomores Melisa Ates, left, and Ege Tomey explain how they have adjusted to life away from home.

Roommates Ege Tomey and Melisa Ates have each undergone life-changing transitions to play tennis at WSU after growing up in Turkey.

Both sophomores got involved in athletics through their families.

Ates, who was raised in Antalya, Turkey, said her brother, uncles and dad all played tennis.

Tomey, who grew up in Izmir, Turkey, recalled her first interaction with the sport she has come to love.

“My mom was playing tennis when I was young, so I would pick up the balls for her,” Tomey said. “One day I just started playing.”

As the two started playing more, they realized they could play at the collegiate level. This led to increased involvement in tournaments.

Tomey said she and Ates played in a lot of the same tournaments and built a relationship that is still intact today.

Head Coach Lisa Hart said the staff was excited to get the chance to go to Turkey when scouting Tomey, but eventually she led them to Ates as well.

“We went to see her [Tomey] and fell in love with her personality and work ethic,” Hart said. “She told us about her friend Melisa and it was just perfect.”

Ates said WSU was a pretty easy choice once the coaches showed up in Turkey. She said the coaching staff’s energy and excitement made all the difference.

Ates said during the season it can be hard to balance school and tennis because of all the time she misses traveling for matches.

“In Turkey, we didn’t go to school, we were just playing tennis,” Ates said. “We would just go take the exams and play the rest of the time.”

Tomey said time management was the biggest thing she had to learn coming to WSU.

Ates said the players don’t get much down time when the Cougars practice five to six days a week for at least two hours. They also have built-in workouts and training during the limited time they have off, so finding moments to catch up on studying for school is difficult.

WSU is currently ranked No. 37 in the nation, but Tomey and Ates have bigger aspirations for the rest of the season.

“Win the Pac-12 Championships,” Tomey said. “We have to be number one.”

Ates said she wants the team to make the NCAA Tournament and advance to the Sweet 16.

Hart credited a lot of the team chemistry to Ates and Tomey because of how easy they are to be around. She said the two being so close brings the entire team closer.

“It’s great for our team,” Hart said, “but I think it’s really nice for them to each have someone when they’re both this far from home.”