Since 1996, HempFest is held to bring marijuana legalization to the forefront 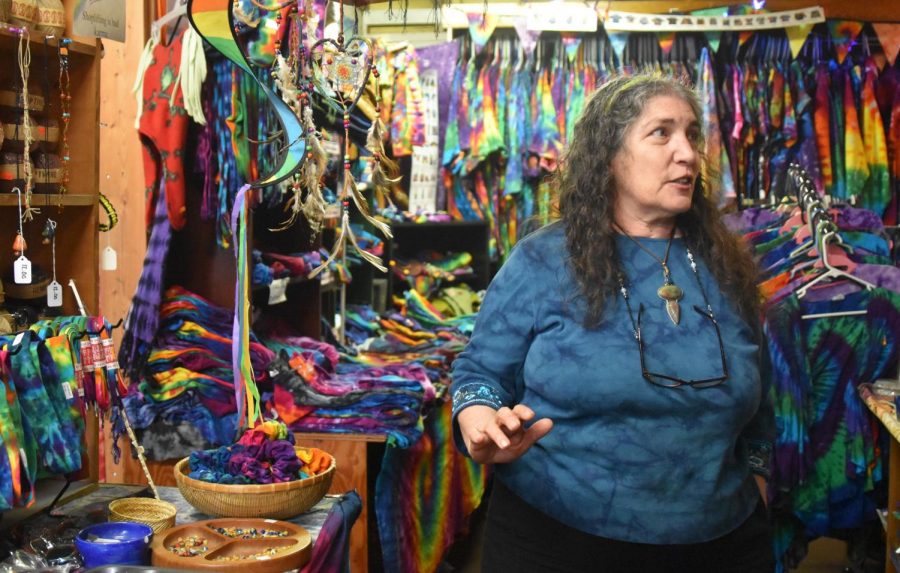 Tye Dye Everything Owner Arlene Falcon has helped in organizing Hemp Fest since 1996. The event will be held in East City Park.

Even when up against a major challenge, like organizing a statewide political movement, Moscow Hemp Fest organizer and self-proclaimed hippie Arlene Falcon trusts that she can rely on like-minded people to support her.

Falcon, who is originally from New York City, opened her Moscow store, Tye Dye Everything, in 1999. Hidden behind La Casa Lopez, the small but abundant shop sells tie-dye clothing for all ages, as well as bumper stickers and hemp-based products, among other things.

On top of running a business, Falcon said she has been organizing Moscow’s annual Hemp Fest for over a decade.

“I’ve been a vendor at Hemp Fest since just about the very beginning,” she said.

At the time, she said, Hemp Fest was a student-run event organized by University of Idaho students. She said the event started because students felt UI’s Mom’s Weekend was much smaller than WSU’s.

Falcon added that in 2006, the UI students that had hosted Hemp Fest for years began to lose interest in planning the event, which is when she took matters into her own hands.

This year, Hemp Fest has many vendors lined up, such as Spokane resident Kristen Hoover. Hoover, who also runs the Facebook event page for Hemp Fest, said this will be her fifth year as a vendor.

“I originally started going [to HempFest] back when I went to WSU,” she said. “I had a boyfriend that was a vendor so that’s how I got started.”

Hoover’s table will sell products from her bath and body shop in Spokane, which is called Peace, Love and Bath Products. She described the products she sells as “fun, colorful and whimsical.”

“Having an advocacy platform has been very helpful,” she said. “With the Moscow Hemp Fest being as big as it was, it got some attention from some people in Boise.”

Falcon said her supporters in Boise have hosted their own versions of Hemp Fest, invested time into speaking with Idaho legislators and started a petition for the legalization of marijuana strictly for medical purposes in the state.

“We know that it’ll be a long time before Idaho accepts it recreationally, but at least we’re advocating for medical use,” she said. “It’s really hard.”

She warned that those who are caught smoking or selling marijuana at Hemp Fest will be forced to leave.

“The cops come and check things out,” she said, “so we just try to tell everyone to be discrete with their usage.”

Even though she has several people in Washington and Idaho behind her and has worked hard herself, Falcon said she doubts that Hemp Fest does anything to address her main concern: medical marijuana legalization in Idaho.

“I mean, it’s popular and people have a great time going,” she said, “but … we’re kind of speaking to the choir and what we really need to do is have an impact on legislators and that’s a lot harder.”

Nonetheless, Falcon said that Hemp Fest still works as a learning opportunity for those who do not fully understand the issue.

“I don’t know if that many … people come just to learn,” she said, “but the end result is that they have the potential to and that makes us happy.”

Admission to Hemp Fest is free, and the event will take place from 9 a.m. to 7 p.m. Saturday in East City Park in Moscow.