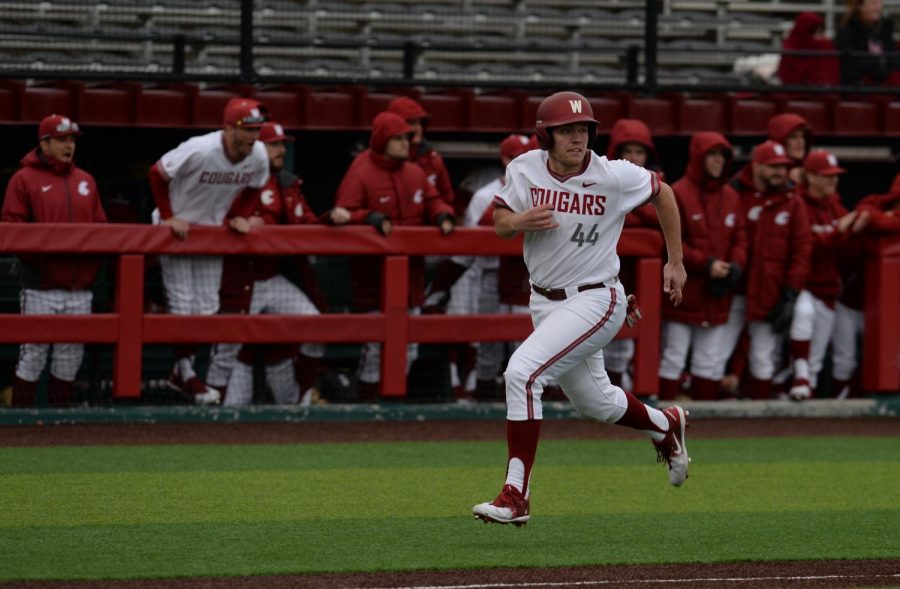 Junior first baseman Wyatt Segle heads toward home base during a game against Saint Mary’s on March 8 at Bailey–Brayton Field.

WSU will face Santa Clara University for the first time since 2008 Friday. The Cougars hold an 11-4 series record against Santa Clara.

Sophomore catcher Cal Waterman said the team loves playing in front of the Cougar faithful, but after this home series it needs to refocus and figure out how to win on the road.

“When we get at home,” Waterman said, “it’s tough for people to come in here and beat us, and we know that.”

“We don’t look at too much of what they’ve done,” he said, “but we know they are going to bring good competition.”

Broncos senior infielder Joe Becht has reached base safely in all 34 of Santa Clara’s games this season, with hits in 25.

Having someone constantly on-base is something Waterman pays attention to as a catcher. He said it doesn’t necessarily put more pressure on him, but it changes how the team pitches to certain people.

Mixing sequences in order to keep the Broncos off-balance will be key for the Cougars because they have some guys that are good at constantly hitting balls off the barrel of the bat, Waterman said.

WSU is in the midst of a five-game stretch in which it is not playing teams within the Pac-12. Waterman said the Cougars know they are facing really good teams on this stretch, so it isn’t much of a letdown from conference play.

He said these non-conference games are a good chance for the team to gain momentum for the second half of Pac-12 play.

“It’s another opportunity to get better and make strides as a team,” Waterman said.

First pitch is scheduled for 5 p.m. Friday at Bailey-Brayton Field. The game can also be seen live on WSU Live Stream.