WSU scored more than 10 runs for the second straight game 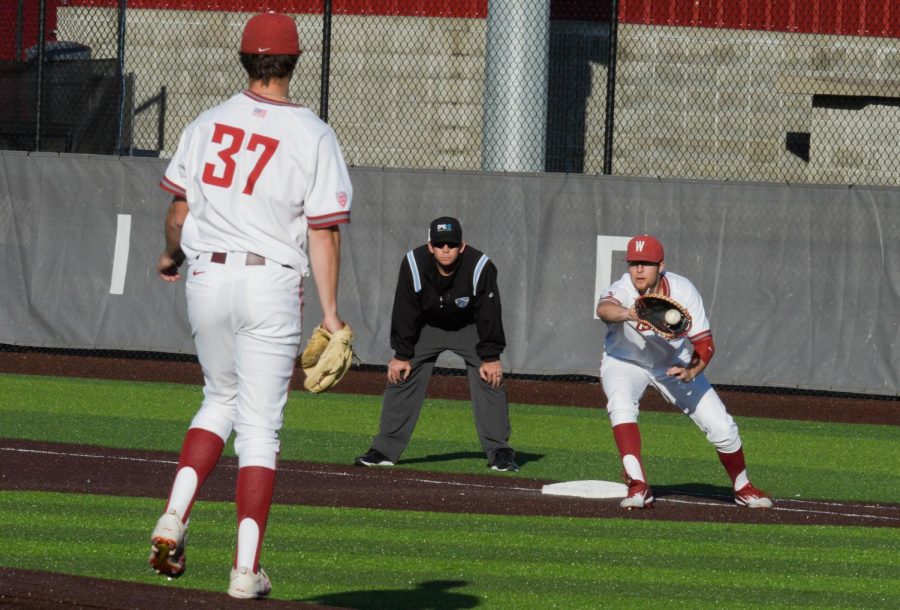 After Santa Clara scores 5 runs in an inning due to numerous mistakes by Washington State, senior first baseman James Rudkin chases down the Bronco runner Friday evening at Bailey-Brayton Field.

WSU baseball brought the offense again in game two of a series with Santa Clara University on Saturday afternoon.

“We got a great start by Scotty,” he said.

The scoring started for the Cougars in the bottom of the second inning, when a two-run home run left the bat of sophomore catcher Cal Waterman.

WSU scored four more in the third inning, highlighted by a two-run, inside-the-park home run by sophomore outfielder Danny Sinatro. It marked the first inside the park home run by a Cougar since 2013.

“I got a little help with the wind and got to do what I love most: run,” Sinatro said.

Two more runs in the fourth inning and three in the fifth gave WSU an 11-0 lead. The Broncos showed a little bit of life in the sixth, scoring all three of their runs on a solo home run by sophomore catcher Jake MacNichols and a two-run shot by redshirt sophomore designated hitter Ryan McCarthy.

Sinatro said the Cougars tried to jump on the Broncos early, and succeeded.

“This series, everything [has] come together,” he said. “It feels good.”

WSU put together a 13-hit game, the second big offensive night in a row for the team. Lees said he has seen some good at-bats from the Cougars and they are being more aggressive.

The Cougars have already won the series, but Sinatro said they want to do what they haven’t been able to do yet this year: get a series sweep.

“Whenever you have the opportunity to sweep a team,” he said, “it’s always fun.”

First pitch for the series finale is set for 1 p.m. Sunday at Bailey-Brayton Field.