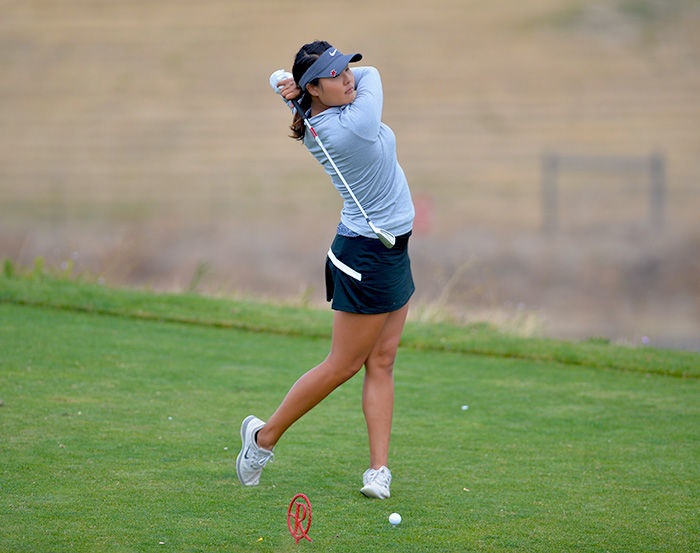 Then senior Cherokee Kim tees off during the Cougar Cup at the Palouse Ridge Golf Club on Sept. 19, 2016.

WSU women’s golf is tied for eighth place at the Pac-12 Championships after the first round of play Sunday.

The team is tied with No. 40 University of California, Berkeley, after shooting a 300 (+12) on the day. They are currently five strokes behind the seventh-place team, No. 9 University of Arizona.

WSU is 13 shots behind top-placed University of California, Los Angeles, who is trying to defend its title. The Bruins are three shots ahead of the rest of the field going into the second day of the tournament.

The individual leader for the Cougars is junior Madison Odiorne. Odiorne started her day with a birdie and hit three more in the final seven holes to finish with a 71 (-1).

The score puts Odiorne in a tie for ninth place with University of Colorado, Boulder sophomore Robyn Choi.

Seniors Alivia Brown and Bree Wanderscheid both shot a 76 (+4) in the first round of the tournament. Following them was sophomore Marie Lund-Hansen with a 77 (+5) and redshirt freshman Emily Baumgart with a 78 (+6).

Round two of the tournament is currently underway.