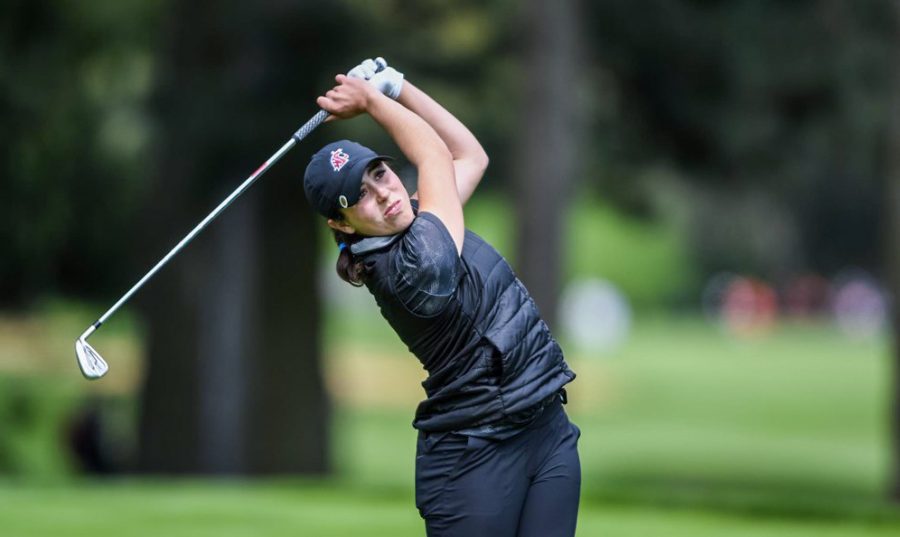 Senior Bree Wanderscheid holds her swing as she focuses on the ball soaring down the course.

WSU women’s golf finished the Pac-12 Championships at the Broadmoor Golf Club on Tuesday in a tie for eighth place with University of Oregon.

The Cougars shot their best score of the tournament in the last round. They posted a 297 (+9) in the third and final round, bringing their total score to an 896 (+32).

This score put WSU 36 strokes behind the Pac-12 Champion University of California, Los Angeles, who shot an 860 (-4) for the tournament. The Bruins finished 12 shots higher than second place University of Southern California 872 (+8).

After two consecutive days of being one-under-par, Odiorne fell to 20th place after shooting a 79 (+7) in the final round.

Wanderscheid was the Cougars top finisher, ending the tournament in 15th place with a score of 220 (+4) after shooting a 71 (-1) Tuesday, her best round of the tournament.

Senior Alivia Brown and sophomore Marie Lund-Hansen also posted their best scores of the championship in the third round. Brown shot a 75 (+3) to finish in a tie for 31st place and Lund-Hansen shot a 72 (E) to place 34th.

Redshirt freshman Emily Baumgart shot an 87 (+15) to round out her final day of the Pac-12 Championship.

The Pac-12 Championships brought an end to WSU’s season, but some Cougars may still get a chance to play in the Women’s Golf Championship. Participants for that tournament will be announced Wednesday.