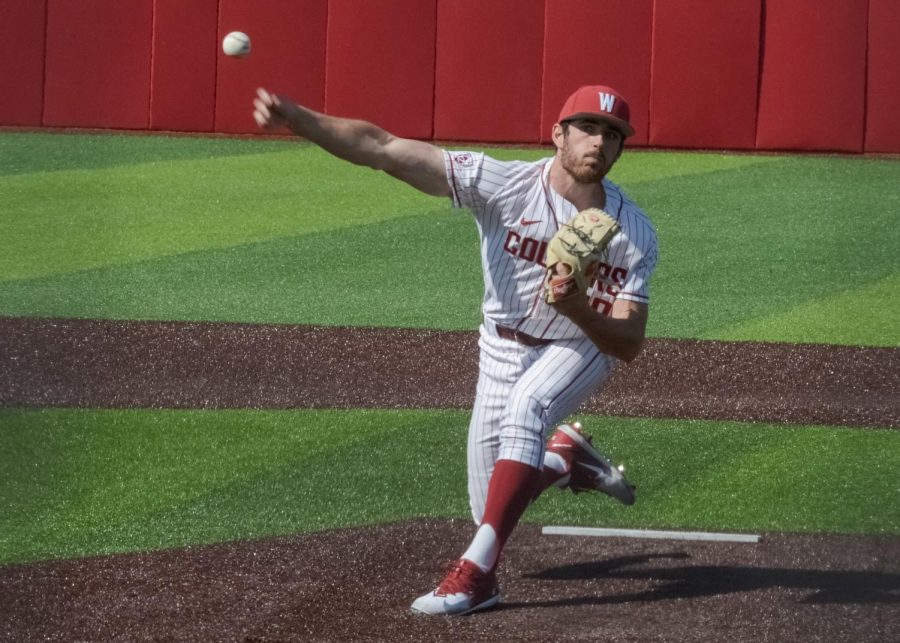 Senior right-handed pitcher Ryan Walker throws a pitch during game two of the series against Santa Clara University on Sunday at Bailey-Brayton Field.

WSU baseball will face Seattle University on Wednesday in Bellevue. The Cougars are coming off a sweep of Santa Clara University over the weekend in which they outscored the Broncos 28-13.

Sunday’s bout with Santa Clara turned out to be a historic one. WSU (13-20) threw a combined no-hitter, two weeks after senior left-handed pitcher Scotty Sunitsch tossed a solo no-hitter against University of Oregon.

Junior right-handed pitcher Parker McFadden started the game and worked the first five innings, striking out four without allowing a hit. The outing earned him Pac-12 Pitcher of the Week honors. Sunitsch earned the award after his no-hitter earlier this month as well.

Besides these two dominating performances, the Cougars have struggled with pitching this season. They are currently ninth in the conference with a 4.83 ERA and opponents are hitting .287 against them, second worst in the conference.

WSU is 9-7 since snapping a six-game losing streak in mid-March. The Cougars sweep of Santa Clara was their first of the season and they are 9-5 at home and 3-12 on the road this season.

Seattle (26-11) comes into the weekend with the best overall record in the Western Athletic Conference. They have won 10 of their last 12 games.

The Redhawks are led on the mound by redshirt junior left-handed pitcher Tarik Skubal. Skubal opted to stay in school after being drafted in the 29th round of the 2017 draft by the Arizona Diamondbacks. Skubal has a 3.57 ERA and 67 strikeouts in 48.1 innings this season.

First pitch is set for 3 p.m. Wednesday at Bannerwood Park.