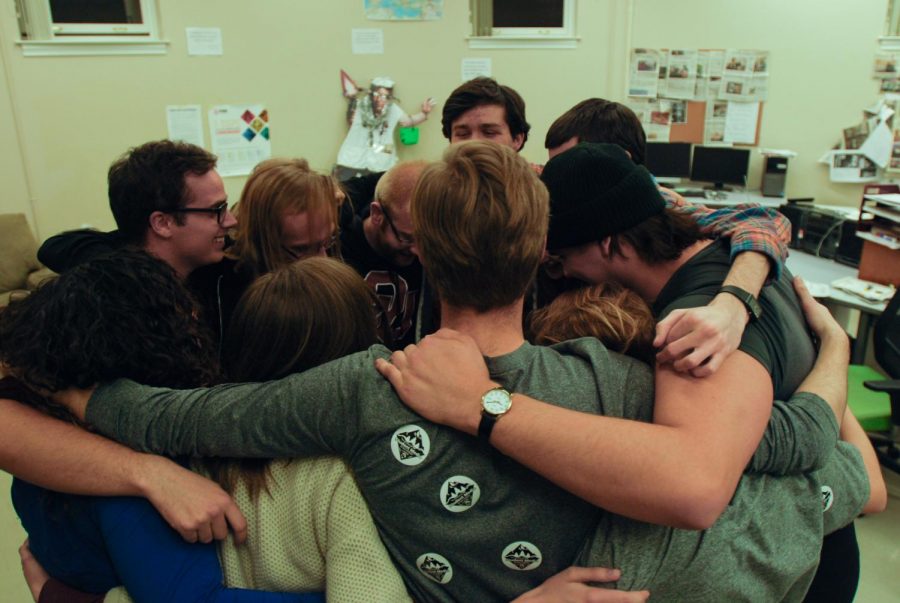 Daily Evergreen editors embrace while cheering after hearing the results of the Student Media referendum in March 2018.

When we learned that cuts to our print cycle were imminent due to lack of funding, we were in the middle of studying for finals and preparing for the next semester of producing a daily newspaper.

Suddenly, we were thrust into a position that no student journalist should have to face. We had to somehow conjure the funds to save our newspaper without the support of our own administration.

This has happened, in some form or another, to numerous campuses across the country. The Daily Campus at Southern Methodist University was merged with their journalism department earlier this month and will no longer have print publications. This will inevitably lead to a lack of independence from one of the few forms of media that still actually has independence.

To fight our fight, we turned to our primary audience: the students. We recognized that without the support of the people we existed to represent, we would never succeed in securing the kind of funding that we needed to remedy our budget deficit — funding from a student fee.

We spent over half a semester pushing for a $5 student fee for graduate and undergraduate students that would secure a sustainable source of revenue.

But we knew we had to earn it.

The most integral part to running this campaign successfully was explaining to the students that the journalists in the Evergreen newsroom were watching out for them and their interests.

We emphasized long-form, investigative reporting that revealed questionable financial decisions after our administration implemented 2.5-percent spending cuts, including seemingly unfair cuts to graduate student stipends and the WSU Performing Arts program. During that time, even our university president announced on Twitter that The Daily Evergreen had the best information on the university’s financial situation.

Students wouldn’t have supported the fee if we weren’t holding the university accountable in a time of crisis.

We also did everything we could to reach students outside the paper. In a school of over 20,000 students, we knew we couldn’t reach everyone directly, but we campaigned where we could. We presented to classrooms, we tabled on our campus’ main thoroughfare, we distributed fliers, posters and buttons imploring students to save their student newspaper — all to reinforce our status as their source of accurate and unbiased information about their campus and administration.

And it worked. We were able to secure a permanent fee from our student body, but just barely. The fee passed by only 77 votes.

Our story of success is rare, and it could have easily ended in despair. Student-run newspapers across the country are facing threats to their print cycles, their choice of content and their independence.

Recognizing the importance of student journalists on campus, reporting unbiased content important to the students and community is integral to fostering the next generation of journalists, while also holding each and every university administration accountable.
We at The Daily Evergreen stand in solidarity with the #SaveStudentNewsrooms movement, as journalists who have experienced the fear of print cuts. We recognize the importance of a newsroom full of student from diverse majors and backgrounds, producing hard-won stories to combat the web of propaganda that people in positions of power intend to spin.

There’s a reason we changed our tagline to “No PR. No B.S. No retreat.” It’s the same reason student journalism exists across thousands of campuses. We believe in keeping those in power accountable. We believe in providing the facts so students know what’s happening in their community. We believe in journalism, and we know what happens when there is no quality journalism left.

If you want to see a change in the news media you are receiving, support the students who are learning to become the news media of the next generation.

We won our battle, and for the foreseeable future, The Daily Evergreen will survive. It’s important now to step up for all student journalists. Read up on the struggle occurring at universities around the country. Be a part of the #SaveStudentNewsrooms movement and let the world know why student journalism is important to you.