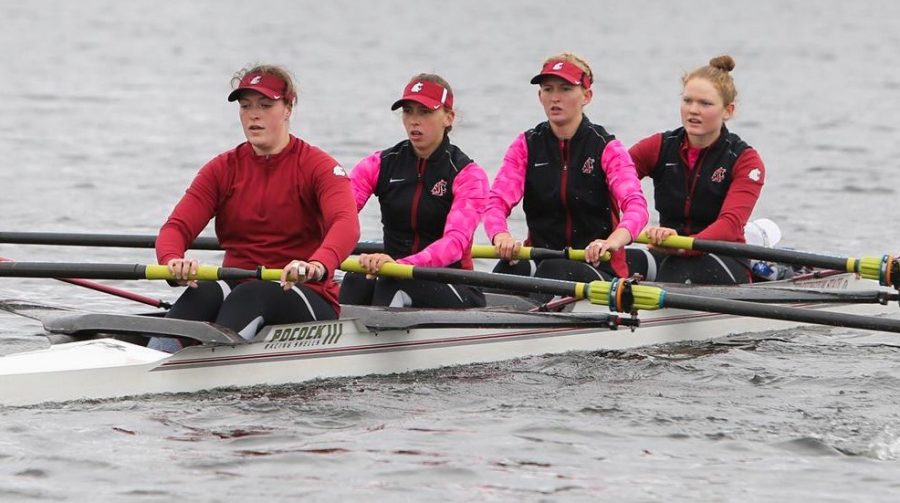 WSU rowing took on Gonzaga at Silver Lake on Saturday. The Cougars beat Gonzaga to win their 24th Fawley Cup.

No. 15 WSU rowing completed a sweep and captured its second-straight Fawley Cup against inland Northwest rival Gonzaga University on Saturday in Spokane.

In the final regatta before the Cougars set their sights on the Pac-12 Championships, WSU notched wins in each event, including the Fawley Cup, which is awarded to the winner of the first varsity eight.

“The team took care of business … with our last tune-up before the Pac-12 Championships in two weeks,” WSU Head Coach Jane LaRiviere said in a WSU news release. “I’m looking forward to having exams be over and heading to Sacramento.”

The weather was not ideal, but the Cougars battled through a gloomy 40-degree morning on Silver Lake with winds gusting about 10 miles per hour.

WSU thumped the Bulldogs in the opening race as both Cougar crews, who finished about a second apart, beat Gonzaga by about 15 seconds.

The ensuing race between the first varsity fours gave WSU a run for its money. The Cougars passed the finish line with just a little less than a boat’s length lead, good for about a four-second difference between the crews.

In the race for the Fawley Cup, both schools’ first varsity eights squared off. The Cougars beat Gonzaga by about a boat’s length in the biggest race of the morning. WSU’s first varsity eight clocked in at 6:24.07 with Gonzaga trailing by about five seconds at 6:29.66.

Now the only remaining hardware WSU has a chance to claim could lead them to the NCAA Championships.

The Cougars will have two weeks to prepare for the Pac-12 Championships on May 13 before they head down to Gold River, California, and dip their oars in Lake Natoma.