Morrow looks to end career with ‘an epic finish’ 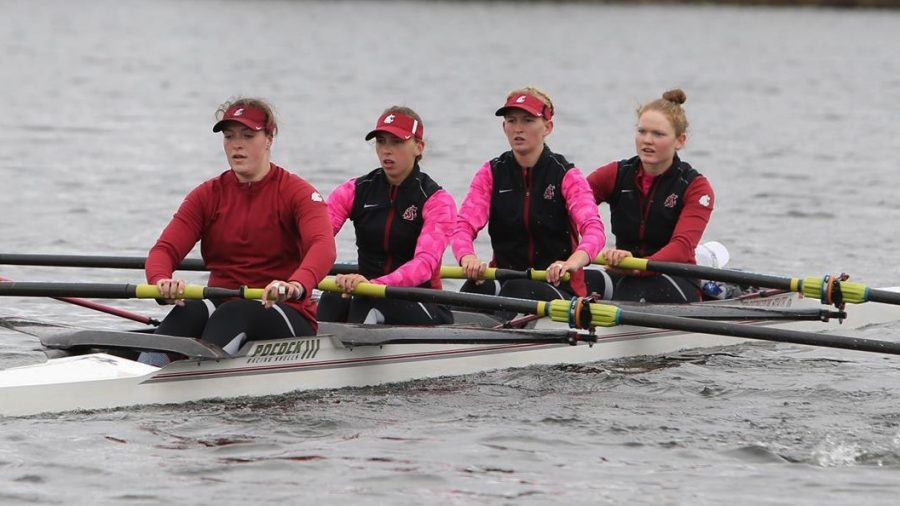 WSU rowing competes for the Fawley Cup on the Snake River on April 28.

Long before senior oarswoman Emily Morrow sat in the stroke seat for WSU at the 2017 NCAA Championships, she modestly characterized herself as simply, “a girl from Canada.”

“This opportunity as a whole was not something I expected to have,” Morrow said.

Truth be told, Morrow doesn’t quite give her younger self credit for what she has accomplished.

A well-versed piano player and a member of the honor roll since seventh grade, Morrow had no idea she was honing the essential skills a rower needs to make it in the meritocracy sport.

At that point in her life she was a basketball player and essentially had no ties to rowing. Unfortunately, consecutive knee injuries brought her basketball career to an end in her junior year of high school.

Looking for a new direction in sports, a family friend suggested Morrow giving rowing a try.

The lone connection she had to rowing in her hometown of Regina, Saskatchewan, was her father’s best man at her parents wedding. He was a former rower and told Morrow about all the opportunities available in collegiate rowing.

Before Morrow had time to think about it, her mother was sold and signed her daughter up immediately.

During her time at the Regina Rowing Club, Morrow flourished as an oarswoman under the counsel of coach Garett Mathiason. She credits him for her decision to come to Pullman.

“I didn’t want to do my SAT’s, that was just too much work for me,” Morrow said with a laugh. “He knew I didn’t want to … and he told me, ‘They don’t take your scores, all you have to do is go in and have a conversation with [Head Coach] Jane [LaRiviere].’”

Between not having to take the standardized test and the connection Morrow felt with LaRiviere, it was an easy decision to sign a letter of intent just a couple months before she was expected to report to Pullman.

From the moment Morrow arrived on campus, LaRiviere has had her in the mix. Morrow typically rows in the stroke seat, where she sat in both the 2016 and 2017 NCAA Championships for the second and first varsity eight respectively.

This season Morrow has taken on a new role sitting toward the middle of the boat for both the first and second varsity eights.

In the Cougars’ final regatta before the Pac-12 Championships, Morrow was back in the stroke seat for the second varsity eight, potentially an indicator of where she will sit in her final run for a shot at an NCAA Championship.

Now, with her final chance to make it to an NCAA Championship, Morrow expects a memorable ending.

“With the process coming to an end, I’m thinking about it and I don’t know if I will ever race again,” Morrow said. “So going into Pac-12’s and NCAA’s, it’s kind of the grand finale and I just want it to be, whatever the results, an epic finish.”