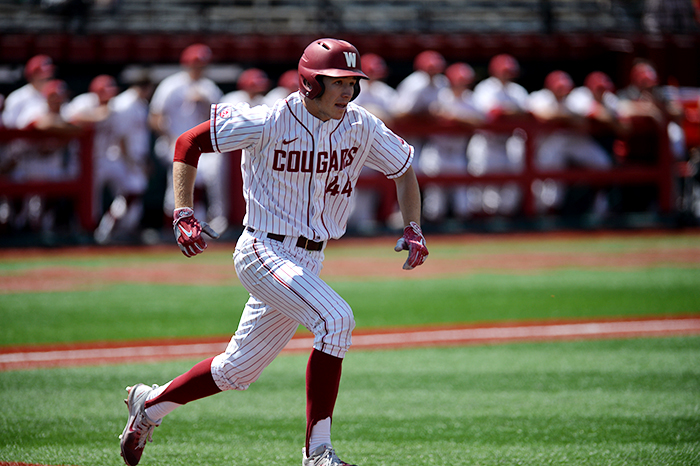 Then-junior first baseman Wyatt Segle runs to first base in a game against Stanford on May 27, 2017 at Bailey-Brayton Field. WSU lost 15-1.

WSU baseball lost 17-3 in the first game of a three game weekend series with No. 3 Oregon State University in front of a packed Bailey-Brayton Field.

“They’re very good and we suck on the mound. That’s how it worked tonight,” Head Coach Marty Lees said. “We didn’t compete one bit. When you give up 20 hits you’re not making good pitches.”

Freshman right-handed pitcher Hayden Rosenkrantz made his third start of the year for WSU. The Beavers got to Rosenkrantz in the second inning to take an early 2-0 lead.

Rosenkrantz finished the day allowing two runs on three hits and one walk in two and one-third innings.

The Cougars answered with two runs of their own off OSU senior left-handed pitcher Luke Heimlich in the bottom of the second.

Senior infielder Ryan Ramsower and senior outfielder JJ Hancock each singled with two outs. Senior first baseman James Rudkin followed with a line drive double into left field just out of the reach of a diving redshirt senior outfielder Kyle Nobach to score both runners and tie the game at two.

OSU scored three times in top of the fifth inning to take a 5-2 lead.

The Beavers extended their lead to 7-2 on a two-run home run to left centerfield by Nobach in the top of the sixth inning.

OSU blew it open with seven runs in the seventh inning. They added two more in the eighth and one in the ninth to make it 17-2.

Senior left-handed pitcher Cody Anderson allowed nine runs on ten hits in his two innings of work. Two runs were unearned due to an error by senior outfielder Blake Clanton who misplayed a line drive in the eighth inning.

Junior catcher Robert Teel added a solo home run with two outs in the bottom of the ninth inning to make the final score 17-3 in favor of the Beavers.

Game two of the series is set for 5 p.m. Saturday at Bailey-Brayton Field. Senior left-handed pitcher Scotty Sunitsch will start on the mound for the Cougars.